I am using fmod core and have an issue with Channel::setPosition for a game project:

Any ideas on how to set this up? Thanks!

MP3 (and many other formats) require internal priming during a seek, this means decoding multiple frames before the target position to ensure the decoder has enough internal state to play your desired position without artifacts (the glitch you hear). When you use FMOD_TIMEUNIT_RAWBYTES you are forcing the codec to that exact position and skipping any priming, which causes the audible glitch.

When seeking a stream there is a non-zero amount of time required to flush the file position, basically instant for in-memory, slower for on-disk, and very slow for a net stream. Added to that time is the priming and initial decode getting the stream ready for playback. If you use FMOD_NONBLOCKING, these operations occur asynchronously on a different thread, otherwise, they occur synchronously in the setPosition call. There is no way to know ahead of time how long this processing will take.

Sometimes you need to seek a stream, but you know so in advance, for the implementation of FMOD Studio’s timeline we have this case with looping. So we prepare a second stream pre-flushed to the correct position and play them back to back. For the cases where you don’t know ahead of time, you might need to delay actioning the seek until the target is ready, again using a second stream and playing the first till it’s ready.

For predictable loops, you can setLoopPoints ahead of time and the stream system will take care of it for you without delay.

Ah, that makes sense. Thanks, will play around with some different solutions and see what works.

I used the solution suggested with preparing a second stream and then switching streams. This works very well with zero delay.

What I’m wondering is if there is any performance cost in having a prepared stream idle in the background? Currently I’m preparing the second stream, and then switching when triggered. The second stream can sit in the prepared state for a long time not being used.

I’m thinking of adding the ability to crossfade between two streams that are sync sensitive. In that case I could have up to 2 streams active, and 2 preparation pre-flush streams (4 total). I understand the active streams require CPU, but what is the cost of the idle preparation streams once they have been pre-flushed but are not in use? Thanks!

Any thoughts on this? Not looking for anything exact, just if its a bad idea in general to have the prepared streams idle in the background.

Apologies for the delayed response- there is no ongoing CPU overhead for a stream that has been loaded and is not playing. It will just be taking up memory, and only when the time comes for it to play will it use CPU resources. You can confirm this by initializing FMOD with the FMOD_INIT_PROFILE_ENABLE flag, attaching the Core API Profiler and ticking the CPU Usage checkbox. Here is a screenshot of the Core API Profiler attached to the gapless_playback example. You can see that the prebuffered sounds only use CPU when they are actually playing: 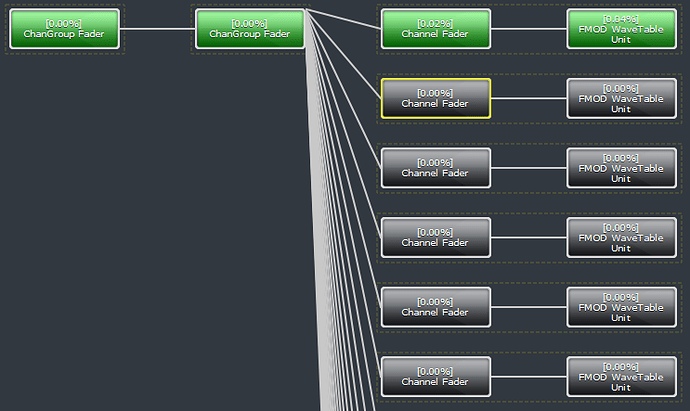 Great, thanks for getting back to me!