[EDIT: for a better readability, I split the bug part into another post]

Hi!
I’d like to present a musical experimentation, which may become a music of our futur game (maybe for the strategic map). Instead of the traditional adaptive music used in video games, based either on layers cross-fading between them or by triggers to another region, I wanted to try a more probability-based approach. Some elements are triggered (or not) by probabilities, among a pool of possible elements. These probabilities are modified by a unique parameter, which allows to shape the dynamic of the piece. Unlike the traditional cross-fading method, this approach makes it possible to involve entire musical elements from start to finish, as if a real player jammed in.
In the second part (4:09), I show a parent event used as a “player” for the main event, setting the parameter value over time.
Please feel free to comment and tell me if i missed a more efficient way of doing some things! 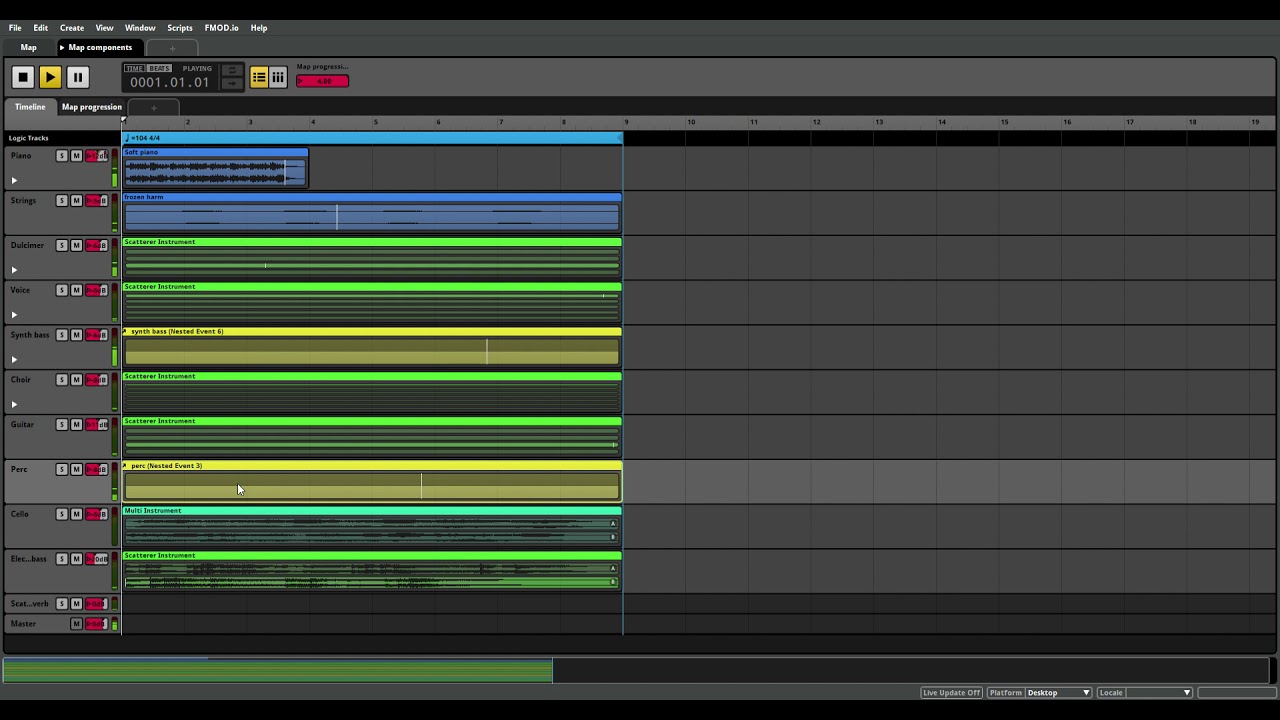 After creating my main event, I first tried to modulate the parameter’s value with a very slow LFO (although I eventually ended up using a “player” parent event). It’s possible to have a LFO slower than 0.01 Hz but it only displays 0.00 Hz, and the miniature view is difficult to interpret (the scale doesn’t follow), however it works.
SUGGESTION: it would be great to be able to create a custom curve LFO modulator

I also have a question. For some tracks, I needed a nested looped event, set at the same tempo than the parent event. The main event and the nested event could be played in parallel a very long time, with no further synchronisation (other than the quantized start). Do I have the guarantee that since their tempos are the same, they will never desynchronize over time? I show one of those nested events at 1:50 in my video. From my tests, it seems to work great, though.

Very impressive event you have set up. I really enjoyed it!

There really isn’t a right or wrong way to set up events and what you have there is likely the best way to get the sound you need.

I will raise a feature suggestion for custom curve LFO modulators, thank you for the suggestion.

In regard to desynchronization - it is possible in situations where there are a lot of voices in play and/or heavy memory/CPU usage. This can be mitigated by setting the event’s Priority to Highest and ensuring the game is not using too much resources.

Very impressive event you have set up. I really enjoyed it!

Do you mean the main event? Does it serve any purpose to set nested events to highest priority or is the setting automatically inherited by the parent event?

The main/parent event’s priority is the only priority that is considered. Any priority settings placed on nested events will be ignored.