How to make a sound inside a scatterer instrument only play in a specific automation range?

I’m currently doing a workaround involving separate scatterers on multiple tracks and automating gain, but it feels bloated having to copypaste over settings, and I wonder if there’s a better way I should be doing this.

Basic thing is I have an event where I want a scatterer to play like this:

I know I can try to fold another step by making each “Group” of sounds its own event with a multi instrument, then setting an automation curve for gain within that nested event. But the problem is the scatterer will still try to play them, rather than skipping over entirely. If Play Percentage could be automated, that would relate to this.

Is there a more efficient way I can do this with 1 track and 1 scatterer?

Which version of FMOD are you using? 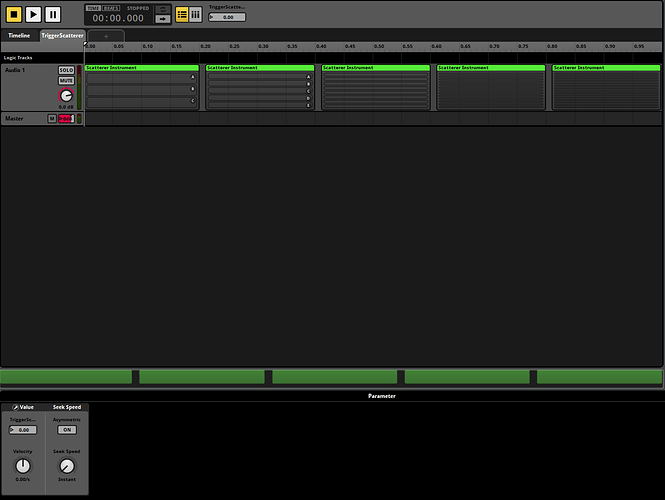 image1402×1054 39.2 KB
Here I have scatter instruments on a continuous parameter page, each set to the values you provided. With the seek speed of the parameter set to instant, if the parameter jumps from 0.05 to 0.80 it should skip all the instruments in between, and if each instrument is set to cut:

@Connor_FMOD AHHHHHHHH!!! BRILLIANT! I forgot about this, that instruments aren’t confined to a timeline but can be placed on a parameter page. My gosh I did this for footsteps etc. (transitioning from walk ➜ run) a few years ago and it slipped my mind. It’s a very clever paradigm in FMOD Studio. I know you took time to do these screenshots and specifics, and I hope your energy will help others seeking this knowledge!

@Connor_FMOD One question about that, how do I set an “overall polyphony” so that as I automate the parameter and move to a different scatterer, it “chokes/kills” the previous one so there’s only a single voice playing at a time? Or in other words, going to a different automation range completely stops any voices playing outside that range. For situations like character dialog where I don’t want it overlapping.

Apologies, my first screen shot was not very clear.
You will want to set all the scatter instruments to cut:

image901×191 25.6 KB
.
A further explanation of what this option does is found under FMOD Studio | Working with Instruments

@Connor_FMOD No, my apologies, that’s really clear in hindsight! “Cut” is just what I was looking for. It sure does help, keep up the awesome work!