Magnet transition region with relative offset, ONLY on the transition?

I could achieve this with 3 seperate magnet regions/parameters, but I really don’t want an extra parameter to change from the transition into the chorus.
I could also achieve it with a destination region on the variation of the verse, with a relative offset, but then I require almost 10 times as many transition regions throughout the entire track, sending each section to every other section.

So yeah, is it possible to relative offset the transition timeline seperately from the entire magnet region it’s going into? If this doesn’t exist, I think it would be an amazing feature to add!!
Magnet regions save me a lot of time, but it seems I cannot use them here
Thanks

No, this is not possible.

However, have you considered quantizing the magnet region, such that the transition only occurs on certain bars or beats? This would ensure that the playback position only enters the transition timeline on beat, keeping its content in time with the sections of music you’re transition from and to. It’s not exactly what you’re asking for, but it would allow you to make the transition without it being awkwardly out of time.

Hey Joseph, yeah I thought about that. I wanted a more immediate transition when triggered by the player. I set it up with a destination region on the transition with a relative offset, which goes into a looping region for the chorus

Hey Joseph, You are right, this is definately the easier and better option. I’m going to take your suggestion, otherwise I will need a ridiculous amount of “transition to” regions.

One issue I am having, is when moving backwards from the song, I need the transition from the later section to come before the earlier section. Otherwise, it suddenly cuts to a far quieter transition, which belongs to the section it is going to.

I really hope this makes sense. Is there a trick for doing something like that? I can’t use the little sliders in the transition timeline because it’s a seperate .wav

I’ve included a screenshot to better understand my situation.

What if I included a copy of each transition in each timeline, and set them to trigger only if that parameter is on? 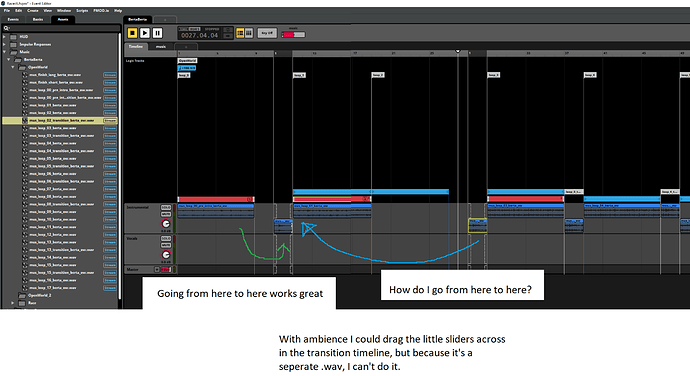 Magnet region is a tool that allows simplification, compared to a bunch of loops and transition regions. But it’s a “one fits all” feature. If you want a more complex behavior, with special transitions in some cases only, you’ll have to do it the hard way, by settings a maze of separate transition regions (the way we used to do that before magnet regions were implemented).

Yep, great, that’s what I needed to hear, thanks Alci. Just wanted to make sure I wasn’t taking the long route when there was a simpler solution