I’m getting a lot of instances of an event despite me putting a limit with Max Instances on the Event Master. I’ve tried using Quietest and Oldest, and yet you can see the number of instances piling up in the Profiler recording (see screenshot - the event above is set to max 4 instances, the event below is set to 20).

I have not seen this behaviour before, and so was wandering if it had anything to do with using the Oculus Spatializer, like maybe FMOD was failing to calculate which sound was quietest as they are not going through the FMOD spatializer?? But this should not affect the calculation of which event is Oldest?!

If I switch the Stealing to Virtualize then it limits the number of Active Instances, but the number of Playing Instances still ramps up. This feels like a compromise rather than a solution. I can’t be dealing with over a hundred instances taking up a decent percentage of my CPU! 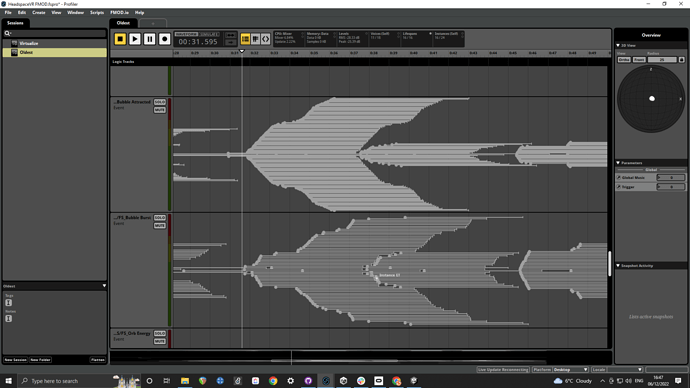 This issue is not fixed, but massively improved by taking an echo from the delay plugin out of the event and putting it into the mixer. It seems FMOD was failing to cull sounds that had echo tails. Made a huge difference to CPU performance!

I haven’t been able to reproduce this issue; when I test here, the effect used to spatialize an event has no effect on whether or not it is stolen. To confirm, if you replace the Oculus Spatializer effect with an FMOD spatializer effect, does the stealing behavior work correctly, or does it still fail to steal instances?

There is a chance that this is actually the manifestation of a known bug in FMOD Studio that causes event instances in the “stopping” state to not be counted as playing when FMOD is evaluating whether the event’s max instances have been exceeded.