I have an event with a looping weapon. I have set it up with a loop region so that when i fire the event (its a weapon firing sound) it loops, and when I stop, it goes to another specific place on the timeline to play the tail sound (weapon firing tail sound).

I would like to have a bit of variation in the loop, but if I modulate the pitch of the audio, in a normal single instrument, with the “random” parameter, then every time the sound is playing it is looping and when it reached the end of the loop a new set of pitch randomization is applied. I don’t want that to happen. I only want random pitch to be applied to the loop every time I start the loop. Not every time the loop is repeating.
Hard to explain but I hope that you know what I mean.

Hi,
The way for the randomization to apply only on the whole instance itself rather than on each loop part is to apply the randomization one level above. There’s several ways to do so, but there often will also randomize the loop speed at the same time (because it will change pitch and time), which you probably don’t want.
I think the best way to go, a bit more costly in terms of CPU, is applying a Pitch Shifter effect on the track hosting the loop.

It sounds like you want to randomize the pitch of the whole event. Just select the event’s master track so that the event macros are displayed in the deck, and apply a randomization modulator to the pitch macro control.

A randomization modulator on an event property generates a new random value only when an event instance is started, and so will result in the same degree of pitch adjustment being applied to everything in the event.

As Alcibiade mentions, any adjustment to the event’s pitch macro control results in the timeline playback position progressing at a slower or faster rate. If you’re using loop regions and synchronous instruments, this will ensure that the duration of your loop region is consistently the same fraction of the duration of the audio that plays during the loop. However, if you are using asynchronous instruments or otherwise want the loop to have the exact same duration regardless of the pitch, then Alcibiade’s solution of using a pitch shifter effect may be preferable.

You can add a parameter to the event, and randomize that, then automate the pitch of the Multi-Sound with this parameter (just add a linear envelope that covers the range of randomization you want). The parameter only randomizes once every time the event is started. This way, the loop length (aka rate of fire) will remain the same, but the multi-sound in the loop will play at a once-randomized pitch on every event start.

Good idea. The parameter could even be randomized at the start of the event using a command instrument (was it what you thought about?). That way, we can use the normal macro pitch without changing the loop duration. 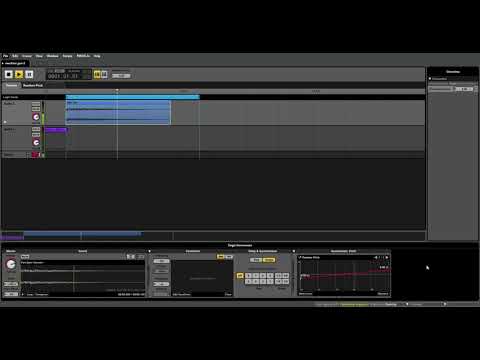 You don’t need to use a command instrument. If the parameter has Random modulation added, it will randomize itself once every time the event is started. To tweak the randomization range, click the parameter tab again to open its settings in the dashboard.