Hi guys, I’m a bit new to FMOD so I’m facing some basic issues, hope you understand and can help

I have 5 alternative lead tracks for one melody. I want to play melody number 1 first, and then play the other four in shuffle order, and also include melody number 1 in that shuffle. I created a multi-instrument, with Sequence Local order, with melody 1 as the first track and then a multi-instrument as the second track, containing all 5 melodies and in shuffle order.

The problem is that after one melody from the nested multi-instrument plays, it goes back to the first track of the main multi-instrument, and so on. How can I force it to stay within the shuffled playlist once it gets there?

How can I force it to stay within the shuffled playlist once it gets there?

With the play count being something between 2 and inf. (As I suppose you want to go from “lead_A” to the nested multi without having to retrigger the primary multi.)

Note that you’ll sometimes be facing the case where “lead_A” plays two times in a row, which is maybe something you don’t want.

Thanks for your recommendation. I’ve tried it but still retriggers the Lead A after playing just one track of the secondary multi.
For the time being, maybe I’ll remove Lead A from the secondary playlist so it never plays two times in a row at least, as you mention.

I’ve tried it but still retriggers the Lead A after playing just one track of the secondary multi.

How do you trigger the primary multi exactly? Only once, and it stays triggered indefinitely? Or repeatedly? Can you screenshot the entire event?

The primary multi is triggered several times because it’s part of a loop (the problem might be there?)
Here’s goes the screenshot (“Explore outdoors” section). Thanks once again! 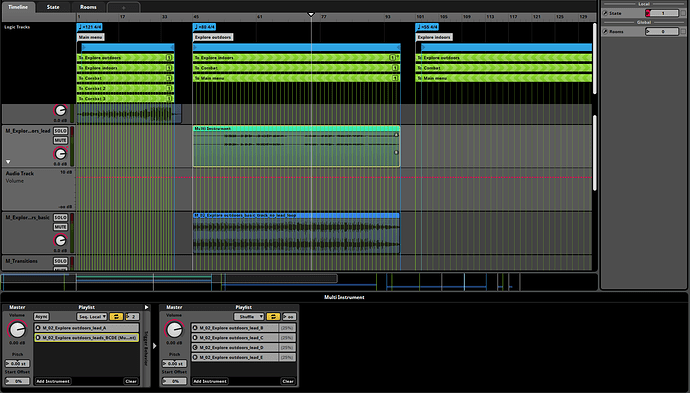 No, since the instrument has at least the length of the loop, it isn’t retriggered.

So it should work as intended, and stay in the secondary multi without going back to the primary, since the loop box is checked. Can you demo the problem with a video?