Hello! I’ve got a BB-like character that I’m trying to make, like, audio pitches up the faster it’s going and it pitches back down if it goes slower. In the FMOD event, I have it ranged from 0-50, the range of the character’s velocity, with the audio changing the higher the velocity is: 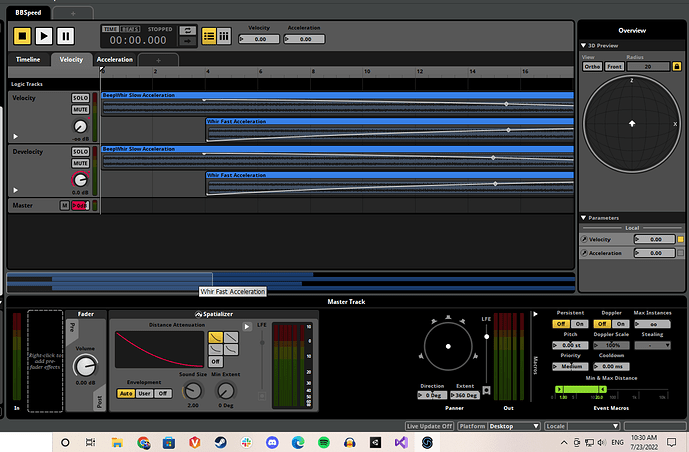 It works in FMOD when I drag the slider while it’s playing.

The script I created for implementation is below. It’s inside the movement logic script, so I removed the stuff that is filler for this forum, like WASD movement and all that:

Velocity was already a variable in the script created for actual movement speed, I didn’t want to use it for also the FMOD velocity, just to be safe, so I created ‘audiovelocity’ and assigned velocity to that variable. ‘Acceleration’ is a parameter that I made for FMOD too, but I wanted to implement it first to see if the velocity would work. I wasn’t having much luck implementing it, so I created a gerParameter after setParameter to see if it was getting anything, and it was. Regardless, no sound occurs, even when the slider moves in Unity and I get Debug logs like crazy showing that it is getting the parameter.

Any help would be appreciated, I figured this was the logical way to implement it but I guess not.

EDIT 1: I’ve been working on it all day, and in-the editor it still doesn’t work. But when I build the game, it will work, but only within the radius of where the character starts. So. That’s odd.

A solution may be instead of creating the EventInstance yourself, try using FMODUnity.StudioEventEmitter, explained further in Unity Integration | Game Components, as it will take care of a lot of preparation for us and we still get all the same functionality. The EventEmitter looks like this in Unity

Once you’ve added the Emitter to your object you’ll want to update your code as follows:

The meaning of each FMOD.RESULT is further explained under Core API | Common

I hope this helps!