I have a large map with different environments (forest, mountains, grassland etc.) that need different ambiences. When they player travels through the world I want the ambience to change smoothly, depending on the location. It looks like this: 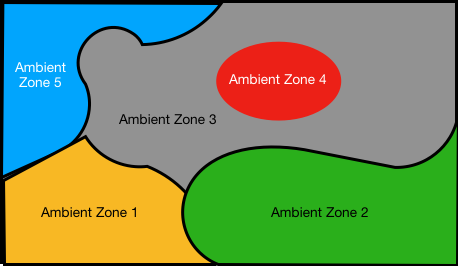 How do I set this up in Unreal? There are some things I already tried out:

How do all the big RPG games handle their different ambient zones?

Thanks Cameron for tuning in. Even though I’m able to follow your approach, it is way above my skill level to actually pull it off. But I didn’t know about the Facebook group. Will definitely check it out and ask there.

If anyone is trying to set up a similar ambient zone system, I found a solution using the method described in this blog post. It is a Wwise tutorial, but the Unreal side of things is the same for working with FMOD: