I’m having trouble getting a sidechain modulator to engage a snapshot for our game’s VO. I found this forum post from early 2022 and followed the steps exactly but cannot get the snapshot intensity to budge (both audibly and visibly; I’d be less stressed if I heard a change but didn’t see one, but I’m failing to achieve either result).

I’ve provided a couple screenshots to show my work 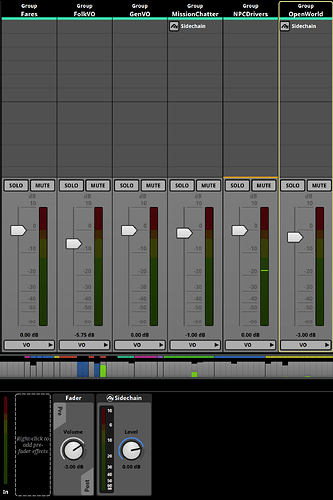 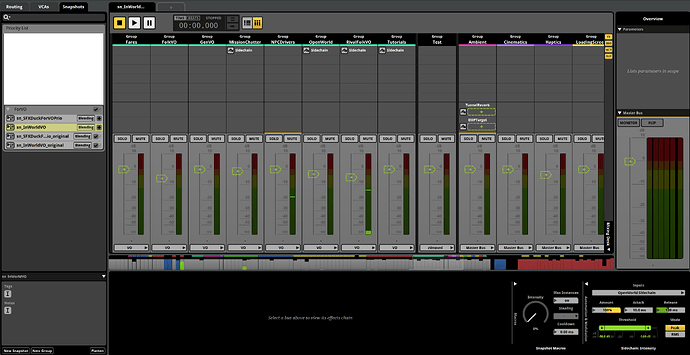 What am I doing wrong?? We’re running 2.02.07, if that helps the diagnosis.
As always, thank you for your time and help in advance!

Hum, I can’t make it work either!

Wow! When even Alci can’t make something work, it usually means it’s a bug

Thank you for checking it out, Alcibiade!

I’ll still wait for FMOD Support to confirm it’s a bug, but in the meantime do you have any suggestions for a way to make snapshots asynchronous for VO in different languages? We’re using Programmer Instruments along with a snapshot on the timeline, but of course if the snapshot isn’t the right length for other languages, it’ll either stop short or hold on longer than intended. If this sidechain method (from the linked thread) worked correctly, that would have been our perfect solution. I’m still hoping I did something wrong or missed a hidden step somewhere

It looks like there’s a bug that prevents sidechain modulators from working when they’re attached to snapshot intensities. I’ve added this issue to our bug tracker, so it’ll be fixed in an upcoming release of FMOD Studio.

Unfortunately, I haven’t been able to find any simple workaround for this issue that you can use in the mean time; while sidechain modulators do work for other properties, when attached to a volume control they can only be used to duck the volume, not to boost it.

Thanks for bringing this issue to our attention.

in the meantime do you have any suggestions for a way to make snapshots asynchronous for VO in different languages?

While I can’t think of any way to work around this issue through FMOD Studio, you could potentially make it work through code by monitoring the event instance’s callbacks to tell when the dialog event finishes playing, so as to stop the snapshot instance at that point.

I’m very lucky to have a brilliant engineer on this team. He found a workaround. A lot of it is roughly the same procedure as suggested in the original link I posted, including making sure the relevant Snapshot(s) are set in-engine to “always play,” as well as making sure that the Snapshot’s Intensity macro is set to 0% first. The main difference here is that instead of using a Sidechain modulator directly on the Intensity, we’re using a Global Parameter’s Automation curve triggered (via Sidechain modulator) by the Mixer Groups’ signals. 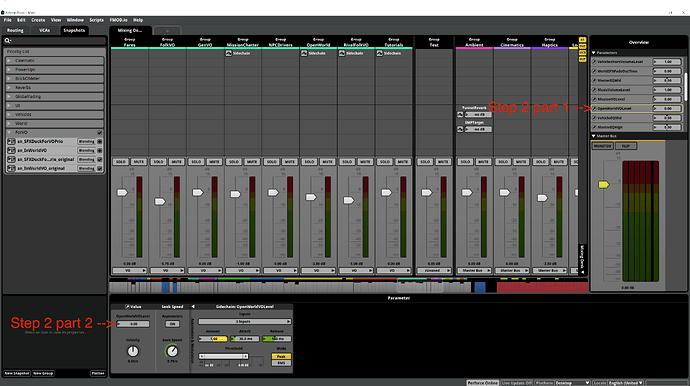 Hope this helps anyone else running into the same issue!

instead of using a Sidechain modulator directly on the Intensity, we’re using a Global Parameter

Ah, that’s a brilliant workaround! I’m glad to hear you were able to find it.