I am working on a game using FMOD and Unity. This game will be released for Desktop (Win) and WebGL. In FMOD Studio I already setup the two different platforms with seperat adjustments. When I built the soundbanks in FMOD Studio I got the two folders with the soundbank in the /Build directory “Desktop” (30mb) and “Mobile” (8mb). So far so good.

When creating a windows build in Unity everything is fine. FMOD copies the soundbank from the “/Desktop” directory to the “Assets/StreamingAssets” directory. When switching to WebGL, the first thing I noticed is that FMODUnity.EventManager also copies the bank from the “/Desktop” directory. When creating the build for WebGL, i have a StreamingAssets folder with the 30mb soundbank that is intended for the desktop platform only.

It seams that FMOD ignores the mobile platform for the build, even when I select “mobile” for each bank platform in the FMODStudioSettings. I guess I can manually change the files in the streaming assets, but I don’t think this is the right approach.

Thank you in advance.
Christian

Edit: Additional information: I only use the master bank. No error messages occurred during the workflow.

When you have more than one platform target in Studio, you need to configure each platform in Unity also, check out our user guide for the “using a multi platform build” section.

Thanks for the reply. I already did the configuration in Unity and switched to “Multiple Platform Build” in the FMODStudioSettings. Here a screeshot: 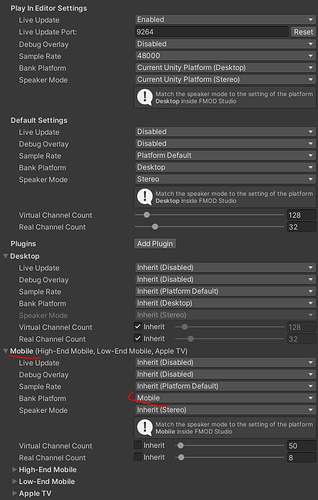 And here the bankloader message in the unity console:

as you can see, fmod recognizes the WebGL platform, but he still copies the files from the “Desktop” directory.

My suspicion is that fmod interprets the WebGL platform as desktop platform.

Can’t you switch the Bank Platform for Desktop and see if copies your “Mobile” banks? That would solve your problem.

Apologies, I missed the part where you mentioned you are on 2.0, in 2.1 we have a much more advanced system for platform configuration where you can add a WebGL (or any) platform and specify the bank directory directly. For 2.0 WebGL falls back to the default bank directory setting. One work around you could try is changing the default bank platform directory to match your WebGL directory, then override (don’t inherit) the bank platform directory for Desktop, Mobile and any other desired platforms.

When Unity is switched to WebGL I already tried to switch all platforms to “mobile” in the FMODStudioSettings and still FMOD copies the desktop bank.
I guess I have to deal with the workaround, where I have to change manually the soundbank file in the streaming assets directory after the build.
Thanks for your answer anyway.

When you tried switching everything to mobile, did that include “default settings” too? Changing the default should allow it to work for WebGL, then specializing for each other platform should make the remaining platform work without having to manually update after a build.

Yeah, I’ve changed everything to mobile, even in the “Play in Editor” settings. When Unity is switched to the WebGL platform, fmod still copies the desktop banks, as you can see in the log message I posted earlier.

I see, thanks for doing those tests.

The way our 2.0 integration is set up, WebGL is tied to the settings configured for Desktop, so there is no way to have different settings for two Desktop platforms, such as Windows / Mac, or Windows / Linux, WebGL / Windows etc. At least that is how it was designed, there is a bug preventing even that from working causing all WebGL settings to fall back to hardcoded defaults. We can fix the inheritance so WebGL correctly inherits from “Desktop” which inherits from “Default” however this doesn’t solve your problem of wanting different settings for Windows and WebGL.

In our 2.1 integration, every Unity platform can have its own settings and you can create your own custom inheritance hierarchy to match the complexity of your project. So if upgrading to 2.1 is a possibility for you, that will allow what you want right now.

As for 2.0, we understand WebGL is a unique compared to Desktop, so we can add the UI to allow that. We are close to finalizing our next release so the changes may not make it into this coming release, which means you’d need to wait till next year for a patch.