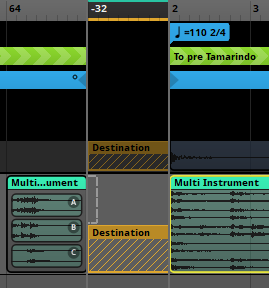 This what you’ll hear: 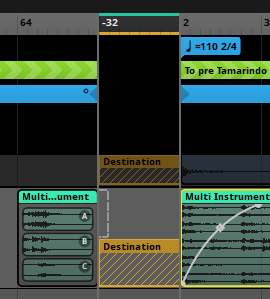 I hope that’s enough info to solve the bug!

Thanks for reporting this bug. Unfortunately, we’re not totally sure we understand the issue you’re describing.

If the multi-instrument has a fade-out like this, you’ll hear the destination with a fade-out.

You mention that the issue occurs when an instrument has a fade-out curve, but the screenshot you provided shows an instrument with a fade-in curve. Did you mean to say “fade-in” instead “fade-out” one or both times, and if so, which?

@joseph Sorry, I meant fade-in on “you’ll hear the destination…”.

I realized now the pictures aren’t telling much… sorry about that!

Let me know if you understood and, if not, I could try to record a video.

Does the multi instrument have an AHDSR modulator?

No. It’s just the fade-in in the arrangement view.
I also discovered that this also happens with single-instruments as well.

Thanks for reporting this behavior to us. This is a bug caused by how we handle fade curves (under-the-hood, they’re a form of automation, and automation is ramped on transition timelines) and so affect all instruments that produce audio signals. It’s already present on our bug tracker.

For now, you can work around this issue by doing the following two steps: