Hello, I need some help. I’m trying to make a music mod for Don’t Starve Together, and I managed to get to where I need to build it. But FMOD Designer is telling me that there are sound files missing. I started this project from scratch so that shouldn’t be. How can I fix the problem? The version I’m using is 4.44.64.

Which files does it tell you are missing, and are those files present and correctly named on your hard drive? If you try and audition them in the banks view, do they play, and do their names turn red?

Sorry; it won’t let me put anymore than 3 total files into a post so I have to link to an image album: https://imgur.com/a/lnQqHHM

This is what it shows me (Capture.PNG). I tried to go to a folder with sounds in it that I want to use, but it doesn’t fix the issue. It tells me this instead (Capture2.PNG).

I went into the banks and see that there are 4 unused files from when I copied someone else’s music mod tutorial files over into my own new file (I know I said I started from scratch, but I didn’t expect some weird hidden files to carry over and cause problems) (Capture3.PNG)

I actually saw this before while experimenting, but I do not know how to remove them. Maybe it would work if I just started over 100% and rather than copying anything over, just create my own simple events from scratch and name them accordingly. But even then, when I tried to make my own events, they look different. I.E. this (Capture4.PNG).

…as opposed to this with the blue/gray shaded area (Capture5.PNG).

…where I can right click and hit “Replace Sound”… The former only has Add Sound. So, all this is just really weird stuff that’s foreign to me and apologies I’m 100% new to this lol.

To remove unwanted files from a bank:

To remove unwanted files from a project entirely:

There is no “remove file” command in FMOD Designer. This is because FMOD Designer references files in external locations instead of copying them to a project-specific assets folder, meaning that such a command could potentially be misunderstood as deleting the file from your hard drive instead of just references to the file in the project.

Thank you very much! Though it’s now telling me that the new sound bank is not empty and must be to be deleted.

Ah, my apologies. It’s been a long time since anyone asked about FMOD Designer, so I misremembered how it worked.

Here’s a better method: If you right-click on a file in the banks view, the context menu will contain “Go to” menu items for each sound def and simple event that uses that file. Remove the unwanted sound files from any sound defs and simple events that use them. Whenever you delete the last reference to an audio file, you will be prompted to remove that file from the project.

I’ve updated my earlier answer with this information.

Yikes! It crashed when I went to delete the last one and confirm to remove any unused objects. That was weird, but after that, it let me build it! And it works in the game! Do you know how I may lower the volume on the tracks?

Thanks for the bug report. I’ll add that crash to Designer’s bug tracker.

There are a number of ways to lower the volume of a track in FMOD Designer.

It works! Thank you so much for all your help!

One final thing, I don’t mean to be a bother, but you wouldn’t happen to know why the game wouldn’t read a specific file, right? Originally, it’s located in a separate folder in the game’s file system, but I laid it out exactly like this mod here: https://www.dropbox.com/s/6zx788smcc1gw3n/workshop-1819289680.rar?dl=0

One final thing, I don’t mean to be a bother, but you wouldn’t happen to know why the game wouldn’t read a specific file, right?

I’m not familiar with Don’t Starve Together, and so don’t know where it expects to find files, nor when and how it reads them. YOu may get better results asking on a forum dedicated to modding that game. If you have any questions about FMOD middleware, on the other hand, this is the place to ask.

Presumably your Designer project contains more metadata than the project you are comparing it to. Without access to both projects, however, there is no way to say for sure exactly how their metadata differs from yours.

And yea, they’re not replying to me on the actual game’s forums, so I’m not sure what to do. Thank you though!

For more information about bank compression format and quality, see the Banks chapter of the FMOD Designer user manual.

I’m sorry, but I’ve run into a new problem: I downloaded FMOD Designer off archive.org and my version again is 4.44.64, and when I try to edit or create a simple event, it does this upon trying to add a new sound: 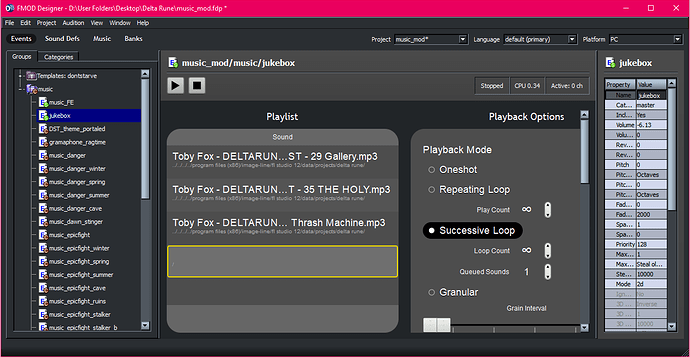 (mine is the blank one with the “/”)…and me nor can the other person who helped me by inserting those songs you see in there now can figure out why. Is my Designer buggy?

…and it only lets me add a song to one “bar” of that, and thus it won’t play the song in the preview.

when I try to edit or create a simple event, it does this upon trying to add a new sound: 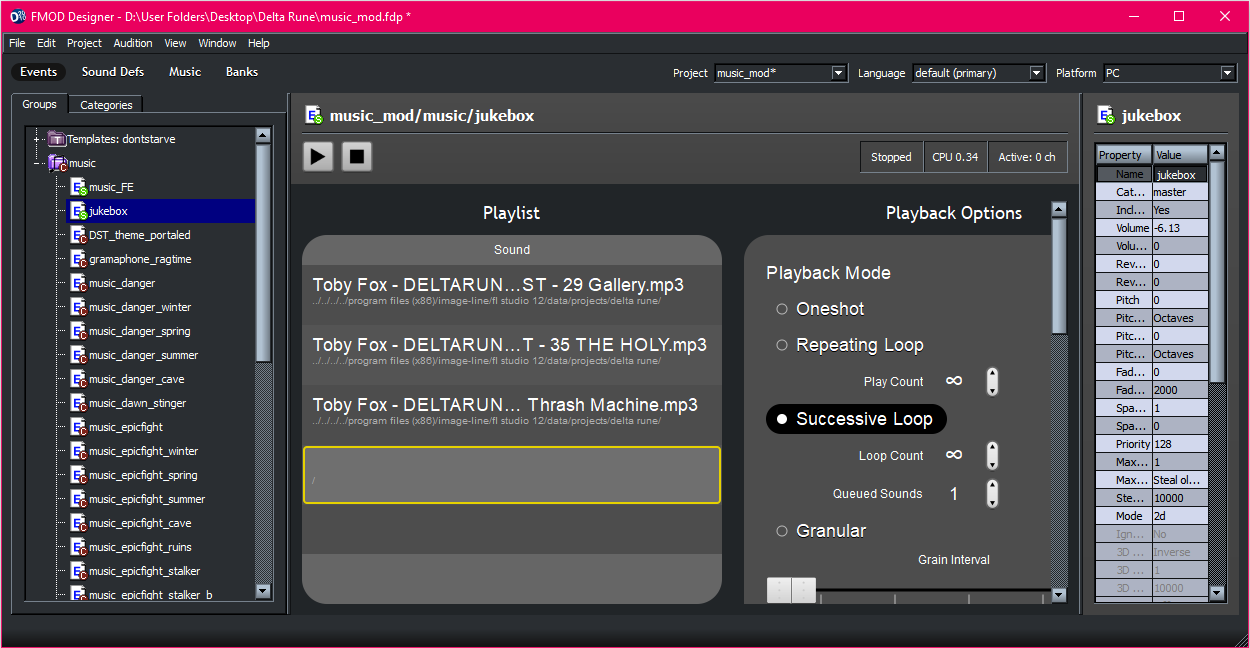 (mine is the blank one with the “/”)…and me nor can the other person who helped me by inserting those songs you see in there now can figure out why. Is my Designer buggy?

The most common cause of the “blank slash” playlist entry shown in your screenshot is trying to add an audio file on a drive other than the drive that holds your project. FMOD Designer records the location of every audio file in your project as a path relative to the project’s .fdp file, and so cannot locate audio files that are on different drives.

…and it only lets me add a song to one “bar” of that, and thus it won’t play the song in the preview.

That screenshot shows the multi-track editor, and does not seem to feature any unusual-looking windows.

I’m referring to the segments of the gray area separated by black lines. When I right-click add a song to that, it only goes inside the segment I clicked, turning that blue. Not the whole thing that doesn’t have the black lines separating it, like the usual multi-track event has (like in my first few screenshots).

So because the song I add is only going inside and coloring one segment of that big gray box, it won’t play it (I’m guessing because it’s not encompassing the entire box). No idea, but I hope I explained it thoroughly enough.

Well, I thought I finally figured this out and got my mod up on the workshop.

I’m starting over and I’m still having the blank slash problem. But both the project and my music files are located on D drive. I’m using this mod https://www.dropbox.com/s/o7lp946n92iwlpj/music_mod_tutorial.rar?dl=0 with this guide: https://forums.kleientertainment.com/forums/topic/113860-tutorial-creating-music-mods-using-thescraps-and-kleis-music-mod-templates/?tab=comments#comment-1286896

Basically when trying to create the “jukebox” simple event, and I try to add music files, it does the blank slash thing.

In FMOD Designer, select “Window > Project Properties” to open the project properties window. You’ll see that the audio source directory is set to “C:\klei\DoNotStarve\contentsrc\sound”. Replace this path with a path to a folder on your D: drive, and it will work.

Thanks to you, I was able to publish my first music mod! Umm, but yet another problem came up… I started a new project using the same provided tutorial files as before, I copy and paasted the events rather than make new ones. Yet when I go to build it, it only builds for a second and creates just the .FEV and says it failed the .FSB when I check Output. Here’s the project file: https://www.mediafire.com/file/98zceylq0sm9dkl/music_mod.fdp/file

I’m sorry to bother you so much, I really do appreciate it.

Could you paste the exact contents of the build output log? It’s the section of the build dialog that appears when you click the “Output >>” button. Are there any error messages that appear when building?