I want to make a sound be played while tanks are moving and another sound be played when they’re static, but I can’t make it work correctly. I tried a couple of different codes and they all ended up in the same result: When I press W the sound starts but it does not stop when I release the key. Can someone help me with that?

Are you able to show how your FMOD Studio event is set up and the code you have written that plays & controls the event?

I have 2 FMOD Studio events, an idle one and a movement one. They’re both just an audio clip with a loop region

And this is the code that I think is more close to one that actually works and also the one that I wrote in the beginning: 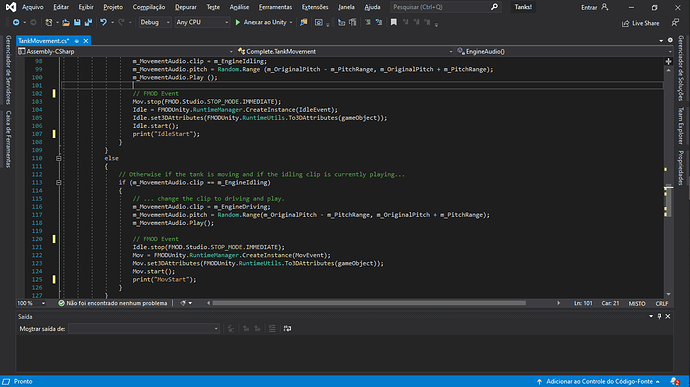 Code tankmovement1366×768 55.5 KB
I’ve deleted other codes that didn’t work, but they were basically the same code on the Update function (this one is in the EngineAudio function) and another one using “while” condition instead of “if”

PS: Since I’m a new user I can only use one image. Sorry about that.

I can’t see the rest of the code so I’m not certain about certain variables. Are the m_MovementAudio variables also FMOD events or are those Unity audio clips? In the FMOD events, I can’t see the event instance being released, nor can I see the “clips” stopping.

Are you able to copy and paste this code in its entirety?

The m_MovementAudio variables are Unity audio clips, they were already in the script when I first opened the project.

namespace Complete
{
public class TankMovement : MonoBehaviour
{
public int m_PlayerNumber = 1; // Used to identify which tank belongs to which player. This is set by this tank’s manager.
public float m_Speed = 12f; // How fast the tank moves forward and back.
public float m_TurnSpeed = 180f; // How fast the tank turns in degrees per second.
public AudioSource m_MovementAudio; // Reference to the audio source used to play engine sounds. NB: different to the shooting audio source.
public AudioClip m_EngineIdling; // Audio to play when the tank isn’t moving.
public AudioClip m_EngineDriving; // Audio to play when the tank is moving.
public float m_PitchRange = 0.2f; // The amount by which the pitch of the engine noises can vary.

From what I understand of your script - one of the AudioClips you’re using will always be playing. The code you have for starting and stopping FMOD events appears fine but I’m not sure that is the issue here.

Could you please check the following: