But the problem that i have it’s that if i do automation to trigger the volume linked to a parameter, the volume cuts out when it doesn’t meet that criteria (of the parameter) and doesn’t sound how i want.

It’s there a possible way to trigger them but when the criteria of the parameter it’s not met it doesn’t cut out the volume of the last asset in the playlist?

Thanks for your time

Why don’t you rather trigger/untrigger your scatterer instrument with the condition you want, instead of automating the volume? That way, when untriggered, the last sound will play entirely.

Thank you for responding!

I did try that solution but the problem that i have in that situation it’s that i want the scatterer instrument to play the sequence that i made in the playlist constantly even if i don’t want it to sound, because, when the player triggers it with the condition that i want, i want the sequence to be exactly where i wanted it on that beat.

I don’t know if i’m explaining myself correctly, sorry

Doesn’t the quantization on the scatterer instrument resolve that problem? If not, could you share some screenshots and describe more precisely the type and length of your assets and the behavior you exactly want?

It doesn’t because i’m not having trouble making it trigger on the beat, what my problem is it’s basically that i have a base track and a set of notes that has a looping sequence of notes from start to end, and the base track is made so it matches with that sequence constantly, so if i activate and deactivate the instrument with the parameter the playlist stops looping around on the sequence, so when it gets triggered again, it’s basically not in sync with the base track anymore because it starts where it left in the playlist. 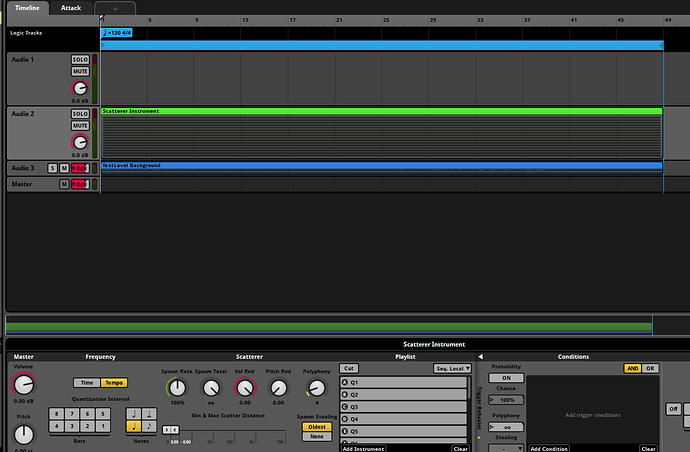 A few questions, though: why are you using a scatterer to play a sequence exactly the same way all over? How many elements in the playlist? You want sounds to be played on each 8th beat, and the retrigger to occur on the next 8th beat, isn’t it?

Oooooh hahaha well atleast we both discovered some stuff!
Yeah about the quantization of the instrument i also did it to the instrument

I’m using the scatterer because it’s the only instrument that has the frequency feature and it was helpful in that regard, maybe there it’s another one that it would work how i want but idk.

In the playlist the are 10 elements

Ok, here’s another design for what you want: 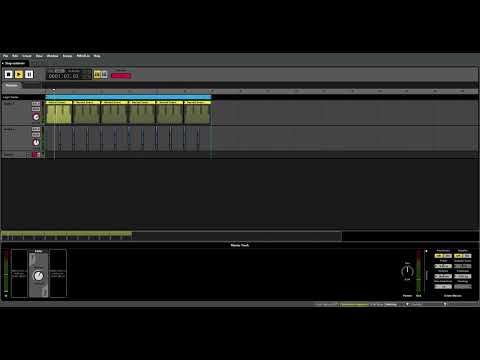 Note that it could have been even simpler, instead of using nested events, by putting my sounds directly in the main event, but a nested event for the entire sequence makes the copy/pasting easier.
Note that all my sounds have the “async” checked (needed for the sound to play entirely when untriggered), the condition on a parameter, and the quantization on beat.
I also could have made, instead of copy/pasting the nested event multiple times, a unique looping nested event, but that’s less robust (the nested event would never be synchronized anymore with the main event, and could theoretically desynchronize after some time).

Oooooh it does work completely how i wanted! Thank you so much.
I never thought of using an event instrument

I really appreciate it man, have a nice day!

I forgot one detail: by doing my method, you’ll be facing a bug I already reported here. The workaround is to make your instruments really tiny.
By the way, @richard_simms or @joseph, this bug still hasn’t been fixed in 2.02.04 and .05, though it is quite annoying: I guess this thread is the 3d time the solution I suggest would work except for this bug. Is it planned to be fixed soon?

Is it planned to be fixed soon?

Hmm… Looking at our bug tracker, it’s been scheduled to be fixed, so the answer is yes. I can’t give you a precise E.T.A. for when the fix will be released, as our agile development methods mean that both the scope and release dates of new releases are flexible, but I doubt it will be long.

Yeah i did notice that and also tried making the instruments really small hahahaha, but it’s awesome, thanks!