Hi,
UE 4.25.3 + FMOD 2.01.04
Distance set in event in FMOD Studio is about 30 times larger then in game.
For example in FMOD Studio setting attenuation distance to 12.7 makes it work in game on distance close to 387. Like on attached image: 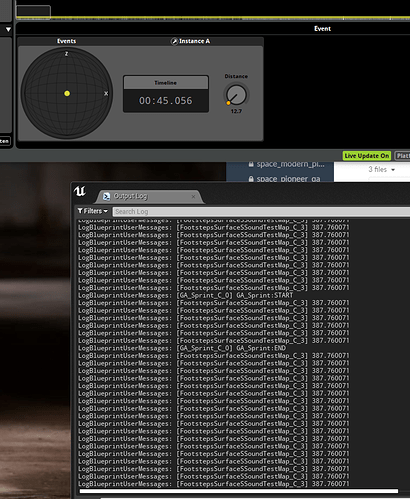 Have a great day

Are you able to describe the setup you used to measure and report the distance on the UE4 side?

Are you using FMOD::System::set3DSettings to change the distance scale in FMOD?

I suspect this is probably a confusion about the units used for measuring distances.

FMOD Studio uses a system where 1 unit is 1 meter, UE4 uses uu (“Unreal Units”) where 1 uu is 1 centimeter. Our integration converts UE4 position vectors from centimeters to meters by dividing the position vector’s components by 100.

So if the distance between the listener and an FMOD event is calculated in UE4 then we expect the value to be 100 times larger than the numeric value of an automatic distance parameter on the FMOD event.

The distance measured in UE4 being 30 times the FMOD distance could be explained if there is a scale factor on the value being displayed in UE4 or if the distance scale in FMOD has been changed.

Glad to see this is solved now, I wonder if you could explain any further? No pressure but if you can then it might prove very useful for future users with similar issues who happen on this topic

We were measuring distance not from listener but from object to which listener is attached. That was causing odd value.