In our project, we have a lot of events where we have both Highpass Simple and a Lowpass Simple effects, and the cutoff frequency has an automation over distance.

I heard that the new Multiband EQ effect is preferred and cheaper (as stated in this question Filters Deprecated?, so we’re thinking of replacing the Highpass + Lowpass effects to a single Multiband EQ.

We find that a Multiband EQ with 12db, Q~=0.41 is kind of equivalent to a single Low/Highpass Single effect. However, if I use two bands for low/high pass respectively, the result sounds quite different ( low+high pass vs. Multiband EQ with 2 bands) when the cutoff frequency get closer, such as both at 1500 Hz. As shown below. 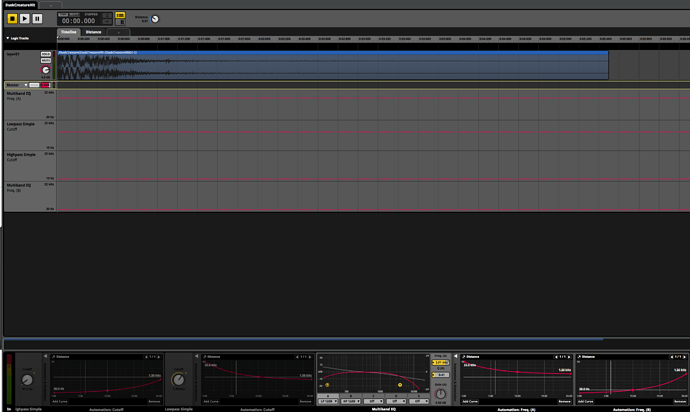 Any advice on how to properly merge a Lowpass Simple plus a Highpass Simple to a Multi-band EQ?

I’ve also been wondering about this. The 6dB slopes in the Simple filters were great for distance cues, and they were easy on the CPU as well.

Firelight, could non-resonant 6dB slopes be introduced to the Multiband EQ as well? Then the deprecated filters could truly be deprecated.

If you’re not happy with the conversion being inexact, it may be simplest to continue using the highpass simple and lowpass simple effects. As long as your game continues to use a version of FMOD Studio in which they are available, there should be no problem with using them.

That said, if you want 6 dB slopes for sound design purposes, we’ll add them to the multiuband EQ in in an upcoming release.

Thank you for the verifications Joseph! The 6db slopes would indeed be useful, and maybe also cheaper on the CPU than the 12dB resonant bands as well.

Regarding CPU cost - what is the largest cost in the Multiband EQ, is it memory access and function calls rather than the maths themselves? I used Multiband as a distance cue filter in a category of sounds in a game I’m working on, but these turned out to be a huge cost on the PS4 so I had to replace them with LP/HP Simple filters on the PlayStation.

I found notes from a programmer that had looked into the filter and EQ DSPs code in FMOD Studio and I quote his comments here:

I took a quick look at the actual code for the following three dsp’s:

What is the primary factor for Multiband 12 dB LP being cheaper than LP Simple?