Hello, the project I am currently working on is on vehicle sounds, we produce vehicle sounds with loop sounds recorded at different points such as 2500, 4500, 5500RPM, and we run them using autopitch by arranging them as you can see in the photo, but now we have a single sound recording from 0RPM to 8000RPM, so it is not a loop (you can listen to it in the soundcloud example), how can I use such sounds with fmod, I want the sound to enter the loop at the point where the timeline is on the timeline, how can I do this?

I’ve been wondering the same thing

like afaik it’s granular synthesis, but I don’t know how to get such data into FMOD and playing properly

I want the sound to enter the loop at the point where the timeline is on the timeline, how can I do this

I guess you mean “on the parameter value”, since there’s no timeline in a parameter sheet.
I don’t think it would work well, but you could try something: create a nested event for that sound, make a tiny loop region at its beginning, and automate the offset of the instrument with the RPM (to change the part being looped). However, there’s no way you’ll have an exact match on the entire range…

That’s exactly what I mean.
like most synthesizers, I want a certain region of the cursor area (1 second before and after) to play as a loop 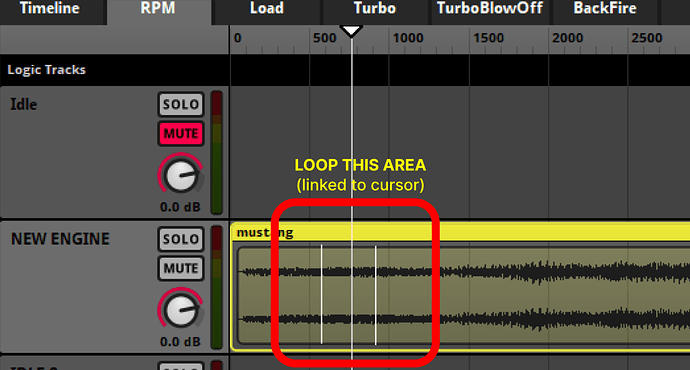 It kinda works as I suggested, but isn’t convincing at all. It’s not possible to make a convincing loop on your audio file exemple in my opinion. And a 2 s loop as you suggested is way too much, since the RPM rises fast in your exemple (I used a 100 ms loop). 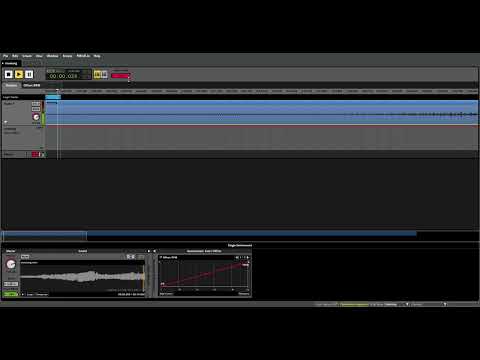 As of the time of writing (October of 2022), there is no way in FMOD Studio to do this for arbitrary parameter values in real time. You can do it for a specific predefined section of a waveform by using a synchronous instrument, and can have the section of the waveform change in response to changes in a game parameter by using multiple loop regions in conjunction with some transition logic, but there is no way to make a loop region dynamically slide up and down the waveform in response to a parameter.

As Alcibiade points out, though, even if you could do this in FMOD Studio, it wouldn’t work well with the sample you posted. The jump in pitch at the end of each loop would be extremely noticeable. You would need to do some complex cross-fading or granular synthesis, and the result would likely sound different to what you intend.

You’ll need to preprocess the sound I guess, to flatten out pitch. So take parts of 1s for example, but pitch bend those so the entire 1s has more or less the same pitch. Then use such loops wth FMOD’s AutoPitch. Of course, this all is not entirely trivial.