I’ve had on and off popping noises for a little while now and its been an absolute nightmare to find the location of the problem. I think I have just found some relevant info.

It appears that all our spatialized sounds using the FMOD Object Spatializer are popping when you are right on the fringe or beyond of the sounds max audible distance.

Any ideas how to fix this? I feel this isn’t how it should be working?

I have not been able to reproduce any issues with object-spatialized events in 4.27.2- we recently found some issues with popping when using ChannelGroups with the Core API, so it may be related to this.
Is this occurring during PIE with Windows Sonic or in a packaged game, with Sony 3D for example?

This is happening in both PIE and packaged. I have tried WASPI, ASIO, Windows Sonic to no avail.

I have uploaded a video so you can hear what i’m talking about. 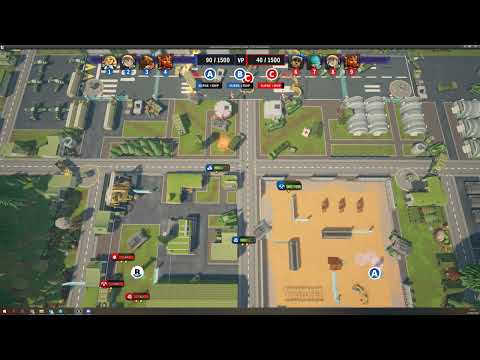 Thanks for the video, that is very noticeable and definitely not how it should be working.

And has this made a difference or are you still getting clicking? I wouldn’t expect it to make a difference in this case but would like to confirm.

It hasn’t made a difference. The only logic I can seem to grasp at is the clicking being the result of a sound on the very fringe of its audible range.

Okay thank you for confirming. Can you please try connecting the FMOD Profiler and see if the clicking is showing up there? I think these kinds of clicks ought to show up obviously in the Levels graph, and that should confirm which events are responsible for the clicking. If you could then record a capture and export it (including banks) to your FMOD Profile I will take a look at what’s going on.

I’ve uploaded a profiler recording to my profile.

During this process however (and I might be going mad) but the clicks dont seem to exist in the actual recording as every playback of said recording produces clicks in different places?

I realised I was on simulate, having switched it to waveform I seem to only be able to hear the ambient audio track and none of the spatialized sound. How do I correct this?

I can see all the wave forms but they dont play on waveform. 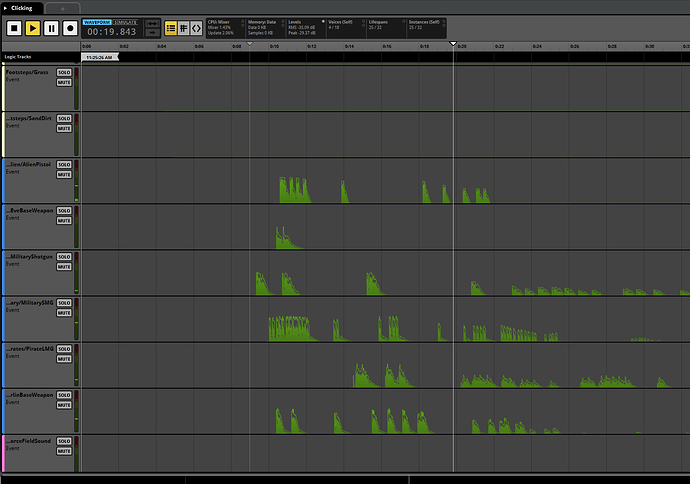 Thank you for providing the profiler capture. I cannot hear any clicks or pops in this capture, but I also cannot hear anything other than the ambience track. I have reproduced this issue in a simple project and found that object-spatialized events aren’t being recorded during live update. This seems to be a bug and I have passed this onto the Dev team to investigate further.
The intention of collecting a profiler capture was to determine whether audio was popping in the FMOD mixer or your audio hardware. Another way to rule out audio hardware as a factor would be to see if pops and clicks are occurring for anyone else. Has anyone else had issues with pops and clicks or has it only been on your machine?
EDIT: Regarding object-spatialized audio not being recorded by live update, the Dev team has gotten back to me and this is expected behaviour. Object audio is rendered externally to FMOD, and therefore we cannot capture it in live update.

That makes sense. THe pops and clicks are happening for everyone playing the game. No matter the hardware.

Okay then, thank you for confirming. Would it be possible for you to provide a debug build of your game to your FMOD Profile for us to reproduce the issue on our end?

We can do it but would you need steam to download the client build otherwise it wont login and work.

That won’t be a problem on our end- if you could please also upload any specific instructions required to get that setup to your FMOD Profile then that would be appreciated.