The game project I’m working on has game menu settings for SFX, Dialogue and Music volume. These are done with VCAs assigned to the respective mixer groups. However, even if the player sets the Dialogue volume to zero, the reverb of the dialogue is still audible.

This is because the dialogue FMOD events send to the reverb from the events themselves, rather than from the mixer group, because they need to switch between positional, reverberated natural voice, and walkie-talkie voice “in your head” (no reverb, just a radio effect). So, effectively the reverb gets sent to before the VCA muting of the mixer group applies.

I tried fixing it by rerouting the dialogue reverb sends to a newly created Return (“DialogueReverb”), that then sends to the Reverb, and assigned that to the VCA. The theory was that if the VCA pre-mutes the return before the reverb send, the reverb would not get any signal. But for some reason, that didn’t work. (why?)

Then I tried assigning every dialogue FMOD event to the Dialogue VCA, not just the mixer group they’re in. Nope, that didn’t work either.

I’m out of ideas here … how do I stop the dialogue FMOD events from sending to the reverb if the dialogue volume is muted via VCA? And preferably, without having to use a snapshot? (since the in-game volume setting is just a VCA tweak)

The simplest thing to do would be to add your reverb returns (positional, natural, walkie-talkie etc.) directly to the Dialogue VCA.
There are some downsides to this approach- there would be less reverb when the Dialogue is on a low volume, and reusability of your reverb returns would be limited; if you are in a tunnel for example, and the Dialogue is muted but you still want to hear reverberated footsteps, you would need a second reverb for the footsteps / other diegetic sounds.
If having a second set of reverbs for non-dialogue sounds is an acceptable tradeoff then I think that would be the best solution.

Thank you for the response.

Would be better to avoid a second reverb because the game needs to run on a PS4 / Xbox One. Maybe I can get an audio programmer / tech sound designer to tie the dialogue volume setting to a snapshot that can adjust the volume of the “dialogue reverb” bus.

It’s a bit strange though - why doesn’t the VCA on that “dialogue reverb bus” affect the level of the reverb send inputs that pass through it?

Another option to enable reuse of your Reverb returns would be to create a global parameter for your Dialogue volume, and use that to automate a Gain effect just before your send:

You could also turn this into a Preset Effect to make it easier to add to each of your Dialogue events: 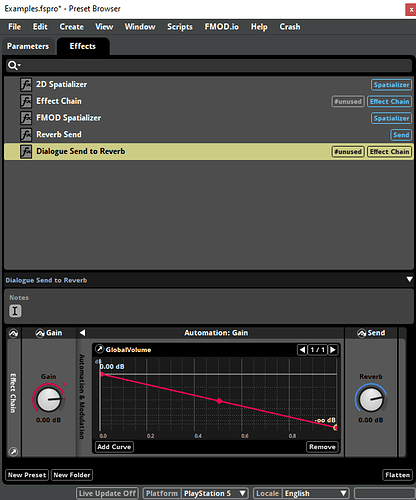 It’s a bit strange though - why doesn’t the VCA on that “dialogue reverb bus” affect the level of the reverb send inputs that pass through it?