I’m attempting to set up a system within UE that will start playing one piece of music when you pass through a trigger box and stop another. I’ve tried using one trigger box BP for entering a dungeon which works, but I cannot figure a way to set up an exit trigger box BP to stop the dungeon music on exit. 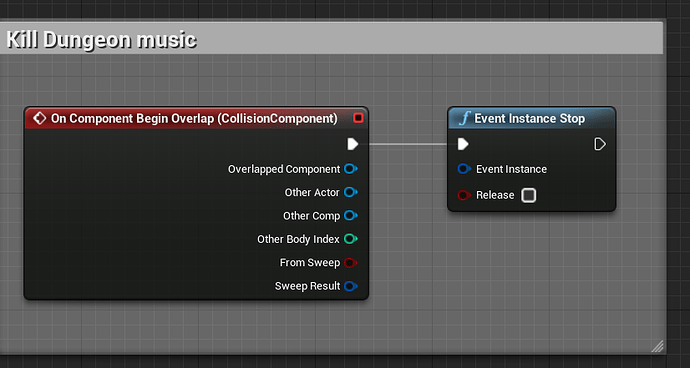 How do I tell the Event Instance Stop node what FMOD audio event I want it to stop?

Thanks Alcibiade. I’ve also tried this. I think it’s what you mean … but even with Auto Play unchecked the dungeon music doesn’t stop. In fact a new instance begins playing over the one I triggered on my way into the dungeon when exiting through Enter_Dungeon BP again. I need to find some way for the BP to know if the music is already playing and if it is, either ignore it or stop it. 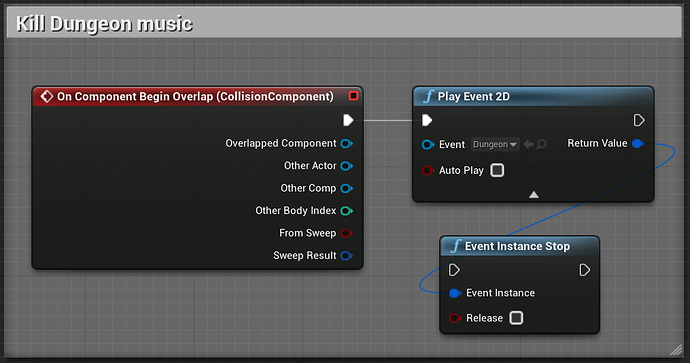 Just to be clear I’m using two Trigger Box BP’s at the entrance to the dungeon. On the exterior I’ve placed Exit_Dungeon and on the interior I’ve placed Enter_Dungeon. My thought is, from the exterior you would 1st pass through Exit_Dungeon where there would be no effect on the audio because it isn’t playing yet. Then once you pass through Enter_Dungeon the music starts to play. Reversing the path doesn’t work though.

As mentioned, you need to grab the reference to the music event instance before you can stop it. You can use the Find Event Instances blueprint to find the dungeon music event before passing it onto the Event Instance Stop blueprint.