Strange thing happens to me after last update. I’m using FMOD units in Bolt, so I added FMOD to Bolt Assembly Options and couple types, but after update I noticed what fmod types dissapears from Bolt. I checked Unit Options and FMOD is gone. Ok… I added it back, hit play or restart Unity - and they are gone again. They just dissapears every time I hit play or restart the engine.

And at first I was thinking it’s Bolt problem, but I tried to add another things in assembly and it’s stays after restarting engine. So it happens only with FMOD. And as far as I know I can’t downgrade FMOD project version…

Error I’m getting after I press “Generate” in Bolt Unit Options:

Here’s video to illustrate the problem:

So… Maybe there’s a way to fix it?

So… New info about that FMOD problem. Something is changed in new FMOD version. I just installed previous FMOD version in clean Unity project and that’s what I see. There is no FMOD in Assembly Options, but I have all what I need in Types Options and all works just fine. I can add it and it’s doesn’t go anywhere after Play or restart. 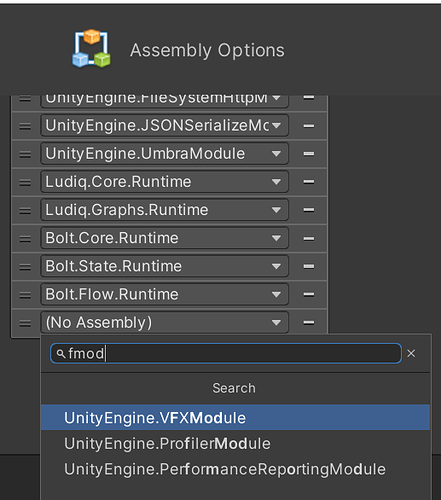 So far we’ve been unable to reproduce this issue internally. Could you please provide us with the following information so we can zero in further on the cause?

Also, just to confirm, does the issue occur with the latest versions of the Bolt and FMOD for Unity plugins in an otherwise blank Unity project?

Good day! This only happens with latest version of FMOD. 2.00.10 working without any problems.

Could you please confirm that these are the versions you are using when observing the issue, or provide the correct version number for us to test with?

Thanks for confirming the FMOD version in use - I’ve been able to reproduce your issue, which appears to be related to another issue that has been fixed in our 2.01.07 release. If possible, could you please try using the 2.01.07 FMOD for Unity plugin (downloadable via our website) and see if the problem persists?

Looks like all working as it should by now. Thank you!