Event Audio Not Passing Through Group with Snapshot 1.10.12 / Windows 10

Hi Folks,
I’ve got an interesting situation here. I set up a Snapshot a couple of days ago that simply fades out an exterior ambience, when you go inside a house. Everything works as expected. Today I created another bus for the interior ambience that fades in when the same snapshot is called.

The issue I’m having is that the Events going through the interior bus are not responding to the Snapshot. In other words, I see that audio is coming into the bus, and the bus fader moves to unity, but there is no sound coming out.

I am using Oculus Spatializer 1.36 on 2 Events feeding the interior bus. The Exterior Ambience bus is using the Oculus Ambisonic plugin.

Any thoughts?
Thanks, Matt

Could you provide a screenshot of your current bus setup?

Hi Matt, do you still need help with your bus/snapshot issue?

Hi Richard,
Apologies for not responding sooner, I’ve been out of town. As far as the issue is concerned, I’ve attached a screenshot that show audio coming into the group, but there’s no output, even though the fader is at unity. 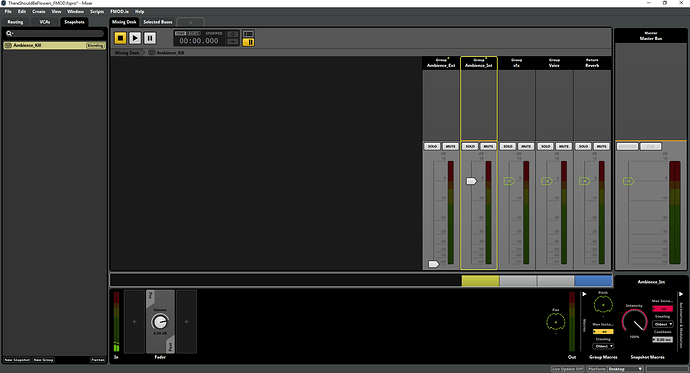 The snapshot seems to be alright. It might be easier to package up your project and send it to support@fmod.com for further investigation. Make a reference to this thread so it can be easily linked together in the support system.