Having trouble with a general ambience scatter instrument, would be much appreciated if I could get some help.

I’ve setup a Unity trigger for an event containing a scatter instrument in FMOD. I get sound and it pans ok when I look around but the closer I get to the trigger the louder the scatter gets - I want the volume to be equal across the map, but keep the 3D panning. I’ve turned off distance attentuation and tried turning off the envelopment and the spatializer. Making the min/max distance massive (so it covers the whole map) doesn’t seem to make a difference.

If you want your scatterer instrument to not attenuate by distance to the listener, you need to remove the spatializer from the event’s master track and then set the event’s 3D attributes to match/follow the listener.

You can use the Event Orientation built-in parameter to give some variety to the event’s output depending on which way the listener/event instance is facing. You could also use game code to keep the event instance facing a certain direction.

I hope this has been helpful.

This is exactly what I needed too so thanks! Do we have to set the 3D attributes to match/follow the listener via code or can we do that straight from FMOD?

Thanks for your time!

The way a scatterer instrument works is that each spawned “scatter” has its own spatializer which is used to pan around. What it is panning around is the event instance’s center, which is why it’s important to make the instance follow the listener. When a spatializer is placed on the master track of an event with a scatterer instrument, then the entire event becomes spatialized, essentially doubling the spatialization going on.

Imagine a scatterer instrument is a bit like an event instrument and the referenced event has it’s own spatializer.

In regards to how “Play Event 2D” works, it would actually place the event at location 0,0,0. In events without spatializers or scatterer instruments, the location of the event doesn’t matter it will always be heard, so it has no need to follow the listener.

Thanks Richard. Just so I’m following, if I have an event with the spatializer on then it can just be a 2D event right and no need to put a spatializer on the master? I looked into the event orientation parameter and added it but unsure of which parameter to automate as the ‘direction’ isn’t on a 3D event.

I’ve gotten the programmer to place a marker at the centre of an area which calculates the rotation of the listener with a float and assigned that float to the direction of the scatterer track (I put a spatializer on the track but bypassed it so I still get a surround panner) this does work great but I’m thinking if there’s a way to do this within FMOD without extra code?

Thanks for your time!

That’s right, an event with no spatializer but has a scatterer instrument will scatter the sounds around the listener regardless of the event instances position in the game world.

Also, as a side note, you can right click on the input or output metering of a track to force change this setting. It would be more graceful than adding and bypassing a spatializer. 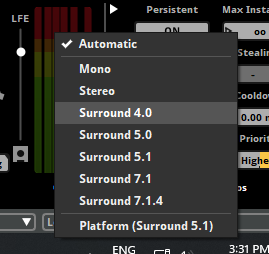