FMOD Studio: Encountered Error: ERR_VERSION The version of this file format is not supported

EDIT: Nevermind! I uninstalled FMOD studio and installed 2.00.12 instead and it worked fine!

I apologize if this thread is a little old to be resurrecting but i figured it would be better than making a new one. I’m having the same issue of receiving the “the version number of this file format is not supported” error. I just downloaded Fmod version 2.01.04 and I’m using Unity version 2020.1.3f1. If my screenshot uploaded successfully you can see it already has the code fix from that github file implemented into it.

What I find interesting is that when i first encountered this, the line “string pluginFolder = Application.dataPath + fmodLibPath + “/win/X86_64/”;” was shown as a collection of local variables and strings (yellow and green on my visual studio setup) while the code under each subsequent “#elif” was displayed as plain (white) text. I then tried the suggestion of deleting the banks from StreamingAssets and the Studio build directory as well as deleting and re-importing the unity plugin. After doing that, the “string pluginFolder = Application.dataPath + fmodLibPath + “/win/X86_64/”;” line of code is now also displayed as plain text. Could this be related at all? I’m still in the process of learning how to code so my knowledge is pretty limited.

Thank you for being so helpful to people on here! 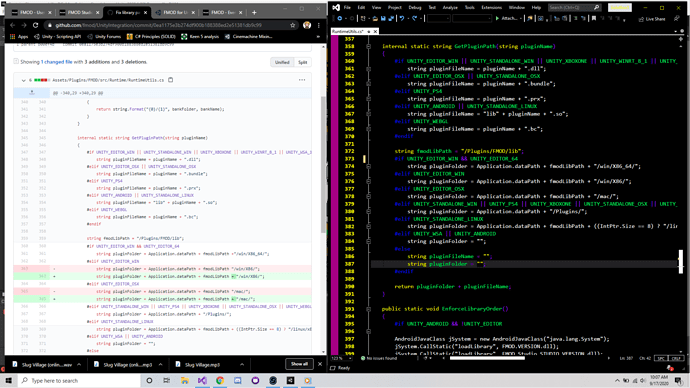 FMOD 2.01.04 still has this error. Tried the fix in the runtimeultis script, still no changes. Also the script is 490 lines (default) instead of the 438 as shown in the script on the github repo. Any ideas?

The github repo has not been updated to FMOD 2.01.

This can be an issue if you are using assembly definitions:

Error CS0117: 'VERSION' does not contain a definition for 'dll' Unity

In release 2.01 there are source files under Assets/Plugins/FMOD/platforms that need to be part of the FMODUnity assembly, otherwise player builds fail with lots of errors about FMOD.VERSION and FMOD.Studio.STUDIO_VERSION missing a definition for ‘dll’. The docs are being updated with this information in the next release.