I have a problem when music or ambience loop cuts out completely when there is a lot of things happening on screen. My assumption is that the voice is being stolen by something, but It doesn’t make much sense as I set the music and ambience priority to the highest (on the master bus inside those events respectively).
For the context in UE4, the event actors are playing on awake within the level. 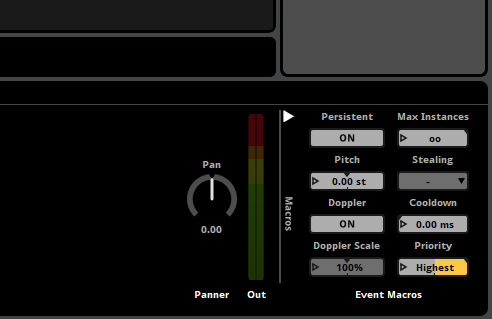 This problem is experienced while playing the game in UE4 on PC, not in fmod editor obviously.

Can you recommend solution?

I’m afraid there’s not enough information here for us to identify why this might be happening.

Have you tried recording a profiler session using live update? That will allow you to identify how many event instances and voices are playing at any given time, as well as other information about playing audio, which may assist in isolating the cause of this behavior and the situations in which it occurs.

Hi Joseph. Thanks for the reply. I will try the profiler session, but could you let me know if there is any setting that limit the number of streming assets? I suspect this is something that might be causing the problem. Aslo, does fmod rely on UE4 internal audio system (For example in Unreal there is a max streaming voices option)? My understanding is that fmod bypasses the UE4 settings and uses it’s own audio system and priority system?

Oh, you’re using streaming assets? In that case, the limitation is most likely your hardware, and cannot be overcome except by reducing the number of simultaneously-playing streams.

When a streaming asset plays, chunks of that asset are continually loaded from disk into memory, then unloaded again immediately that they finish playing. As a consequence, each and every playing instance of a streaming asset requires constant drive I/O to function. Because most platforms can only load a limited amount of data from storage per unit time, this means that most drives can only support a limited number of simultaneous streams; the exact number varies depending on format and hardware, but is usually a single-digit number.

We recommend that you reserve streams for assets that are unlikely to play at the same time as other streaming assets, such as non-diagetic music, non-background dialogue, and ambient background loops.