Hi there! I’m trying to reverse engineer for fun the Woodtick Music System from Monkey Island 2 into FMOD. So far, everything has gone smoothly; the only issue I’m having is with the transition regions where I’ve set the quantization interval to 3 bars. No matter what I do, the playhead skips to the destination marker at the end of the first bar. I thought this happened because I modified the original transition regions I’ve set up, so I’ve recreated them from scratch to no avail. I thought the tempo markers were causing this issue, but I was wrong and now I’ve run out of ideas 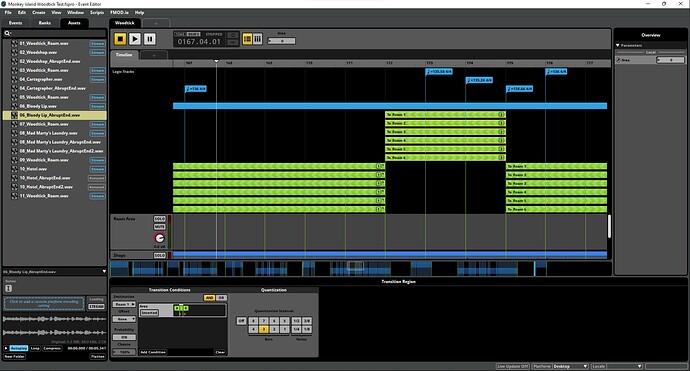 Also, if you want, I could share the FMOD project so you can see in person what I’m talking about

Here is a link to the project too

the playhead skips to the destination marker at the end of the first bar.

No, joseph. I realize my explanation wasn’t that clear, so let me clarify. It’s probably easier to open up the project and see how it’s structured.
However, in the timeline, there are six free roam areas for the village of Woodtick and five shops the player can visit. Each free roam area has five transition regions, one per shop, that make the playhead transition to the shop corresponding to the “Area” value after one bar. That works just fine.
On the other hand, shops have twelve transition regions (only two shops have twenty-four regions because there are two stylistically different parts of the shop’s theme).
Six feature a transition timeline used as a cadence of some sort, and six occupy the last three bars of the stem. I have set the quantization interval to three bars on these last six transition regions, but it just plays one bar and then skips to the destination marker it’s supposed to go to.
I have tried bumping it up to four bars on some regions, but it just keeps playing that transition region only for two bars, then skips to its intended destination

That’s super odd. I replied, but my message disappeared. However, the issue happens explicitly in those regions I’ve shown in the screenshot. The shops’ stems have two different transition regions; one features a transition timeline and leaves the last three bars of the stem out of the region; the second has just a transition region with the quantization set to three bars, but it just plays the first bar and then skips to its intended destination

Six feature a transition timeline used as a cadence of some sort, and six occupy the last three bars of the stem. I have set the quantization interval to three bars on these last six transition regions, but it just plays one bar and then skips to the destination marker it’s supposed to go to.

Thanks for the clarification.

You should therefore be able to get the behavior you want by removing the tempo markers at the starts of bars 173 and 174 (since you never want to transition from those locations, you don’t need the tempo to be accurate there in any case) and by adding a tempo marker at the start of bar 172 (to ensure that the bar count for the purposes of quantization starts at the beginning of the transition regions).

I see. Thank you for the clarification, although now there is a new problem: I went to the woodshop marker and removed the last tempo marker (bar 38). When I place the playhead at the beginning of the second transition region and set the area value to 0 or an even number, it goes to the beginning of the loop, plays a small portion of the larger transition region, triggers the transition timeline at the end of that portion’s bar to finally move to one of the roam areas.

I presume that you mean the set of transition regions that begin at bar 36.

Looking at those transition regions, I can see that they’re quantized to three bars, and that the loop region ends slightly before the third bar does. As a result, those regions are never actually being triggered, as the playback position inevitably reaches the end of the loop region and is sent back to its start, and never actually arrives at the transition regions’ quantization point at the start of bar 39. This loop region sends the playback position back to a beat before the end of bar 18; from there, as you have observed, it plays out that final beat of that bar, then hits one of the quantization points at the start of bar 19.

There are a few different ways you could change this behavior, but all revolve around ensuring the transition markers’ quantization point comes before, or at the same time as, the end of the loop region.

Personally, I’d lean towards replacing those three transition regions with transition markers, as you seem to only want the transition to occur at one specific point on the timeline instead of a range.

Thank you, Joseph. Transition markers are indeed the best course of action. Thank you for your time, and excuse me for replying with almost a week of delay

Thank you for your time, and excuse me for replying with almost a week of delay

That’s not a problem! We’re here to reply to you, not the other way around.

In any case, I’m glad to hear you were able to resolve the problem.