Setting up Steam Audio Occlusion in Unity via FMOD Studio

In Unity, when I attach a FMOD Studio Event Emitter Component and a Steam Audio Source Component (Occlusion is ticked on) to a Gameobject (Sound Source), then attach a FMOD Studio Listener to my Player (Sound Destination), assign an Steam Audio Material (concrete) to various Gameobjects between them (see picture), and play the game, I can hear the Sound (position and attenuation), but I can´t hear any occlusion going on. Occlusion inside the Steam Plugin Effect, located in the Audio Track of FMOD Studio is set to “simulation-defined” as stated in the documentation.

The potential Error:
The documentation explains:
"In Unity …

Is there even a way to attach an Steam Audio Component to an FMOD Event Emitter (Component)? Is this an error in the documetation? What am I missing?

Thank you very very much in advance!

Player Gameobject is located on the other side of the immense stonewall (tiny tiny grey spot). 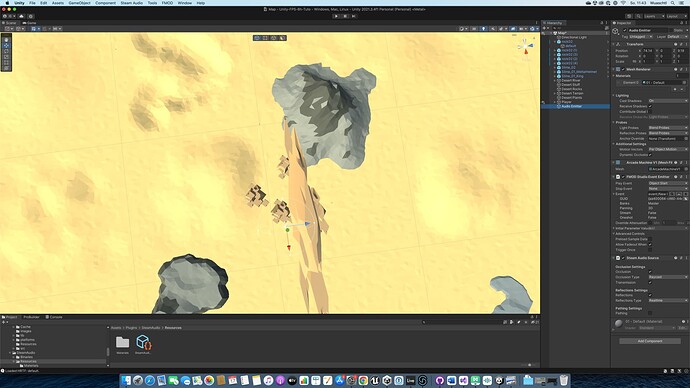 Just to confirm, have you done the necessary setup in FMOD Studio, including adding Steam Audio Spatializer to an event and adding phonon_fmod to the dynamic plugin list?

Thank you for getting back to me.

I found the issue:

I somehow managed to overlook the passage in the steam unity integration documentation, where it says that after applying steam geometry you have to do: Steam → Export Active Scene…
I did that and now it works =)

Exporting the Active Scene then automatically creates a new Gameobject named Steam Audio Static Mesh. Just mentioning this for the beginners, like me.

Thanks again, I was sure I would switch to DearVR. Now I am unsure again.