Studio issues a ‘Program Close’ alert once every five seconds (exactly). What is it doing?

What do you mean by a “‘Program Close’ alert?” The only meaning of this term that I am familiar with is the one that occurs when you attempt to shut down your computer while certain programs are still running, an they do not immediately close when instructed to do so by the operating system.

I mean whatever Windows does to cause the system sound event ‘Close Program’ to occur, such that if one has a sound assigned to it, that sound will play. 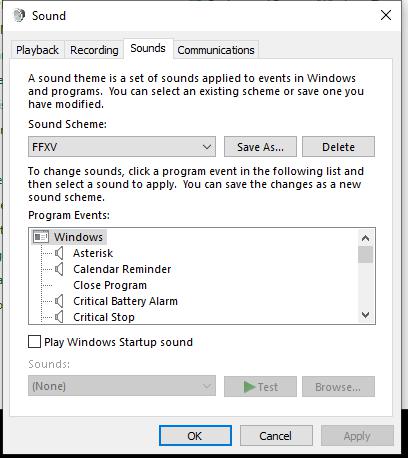 Thanks for the clarification.

I’ve set windows to play a sound upon closing a program and am trying to reproduce this issue, but haven’t had any success, which suggests I must be doing something differently to you. Which version of FMOD Studio are you running? Does the program close sound play with totally blank projects, or does it only occur when projects with specific content are open in FMOD Studio?

Thanks for the clarification! After some investigation, I’ve been able to reproduce the issue and determine its cause.

Our source control integrations automatically query your source control repository for updates at five second intervals, so that FMOD Studio can mark events and other content that have been edited or modified by other users in its browsers, as described in the Syncing Your Project section of the Using Source Control chapter of the FMOD Studio User Manual. In order to perform this query, Studio silently runs a source control executable (such as P4.exe), spawning a short-lived process. When this process returns its result to FMOD Studio and ends, it terminates - at which point, Windows recognizes the change and plays the “Program Closed” sound.

We can’t avoid creating these processes, since they’re a vital part of how our source control integration works, but we’ll investigate whether it’s possible to avoid notifying windows of the program closure, so that it does not play the program closed sound.

Thanks for bringing this issue to our attention!

I figured it was something like that. Not really a problem; I had initially thought it would be nice to put system sounds on opening and closing programs, but FMOD is not alone in spawning dozens of invisible processes, and this feature was not set up intelligently enough (by Microsoft) to tell the difference between a user’s voluntary open/close and background processes doing the same. Studio was just the only one doing it on a regular schedule.