My team has been having issues with our version control solution (git LFS) and FMOD. I am the only sound designer on the team, but in order for them to acquire the FMOD changes, they have to manually re-build the banks every time they pull or merge (otherwise they get runtime errors related to missing events). Sometimes even this doesn’t work, or only works after two or more attempts

I double checked that the FMOD Builds folder is being updated. We currently have the Unity Editor connected to the fspro file on all workstations. Is there anything that I can do to help diagnose the problem? It’s especially bad on Mac computers.

What version of FMOD are you using?

It sounds like the something isn’t being updated from git properly, or possibly being overwritten from banks in the project (in the streaming assets folder)?

Hi Cameron, thanks for the response.

I just verified - none of the banks in streaming assets are checked into version control; is it possible that the banks in the Build folder aren’t getting copied over when my teammates pull?

I should say our repo has had problems with meta files and missing references, but these have largely been remedied. I’m not sure if that would be related this issue, as it mostly resulted in missing references on game objects. We also were mistakenly ignoring the fmod Build folder for some time (as [Bb]uild is in the boilerplate Unity .gitignore), but we also fixed this problem a while ago.

Would the Single Platform Build option be advantageous? I’ll try switching to that option.

When do the errors occur? In editor, play-in-editor, built game?
Are there any errors or warnings in the logs at all?

The errors usually occur at runtime in the editor – in general it’s “event not found.” I’ll try to get some logs from my teammates machines.

Here are the warnings from my last profiling session in my fmod_editor.log file:
[WRN] SoundSourceInstrumentInstance::startChannelIfReady : Loading delay exceeded, sound may play at incorrect time

[WRN] PluginEffectModel::init : Missing DSP plugin ‘Resonance Audio Source’
the second one occurs a number of times, even though resonance audio is set up properly and is functioning in the game.

we do have a few longer files (30 min) I’m wondering if these aren’t being built properly, as I occasionally get an error about them in unity after I build :

despite this error, the event in question functions as intended in my editor and builds. the issue is mainly one of workflow

Here are some additional logs and error messages from my teammates’ side. 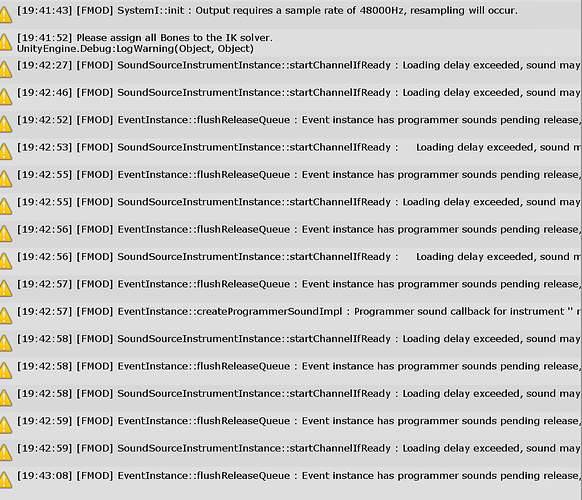 This can usually occur when playing long sounds that are either not set to streaming or have not had their sample data loaded before trying to play them. Using the Studio Profiler will show you which events this is occuring with and how long the delay is.

[WRN] PluginEffectModel::init : Missing DSP plugin ‘Resonance Audio Source’
the second one occurs a number of times, even though resonance audio is set up properly and is functioning in the game.

It might be a good idea to double check that all the steps for adding plugins have been followed, and that the Resonance plugins files are in source control too.

In one of the pictures you are getting ERR_FILE_NOTFOUND for the Master.strings.bank, this will then cause all the EventNotFoundException's.

Are you able to share a screenshot of the FMOD Unity Integration Settings? I can see if anything stands out about it.