So I’m using FMOD for a multiplayer game and the game is very early in development at the mo, the dev and I playtested the first time yesterday and noticed a few bugs, the main one noticeable was that both of our footsteps were playing in 2D for each other, just wondering what the implementation looks like for ensuring that they play in 3D for everyone else?

Thanks so much for your time!

Is there a spatializer in the effect chain? Could you share a screenshot of its settings?

So no spatializer no, we worked on a game in the past using just unity implementation and they handled the 2D/3D spatialization that end via code I’m guessing so need to know how to get that working in FMOD. Or is it again a thing handled by code?

Footsteps are generally 2D on the player so didn’t think to use a spatializer. 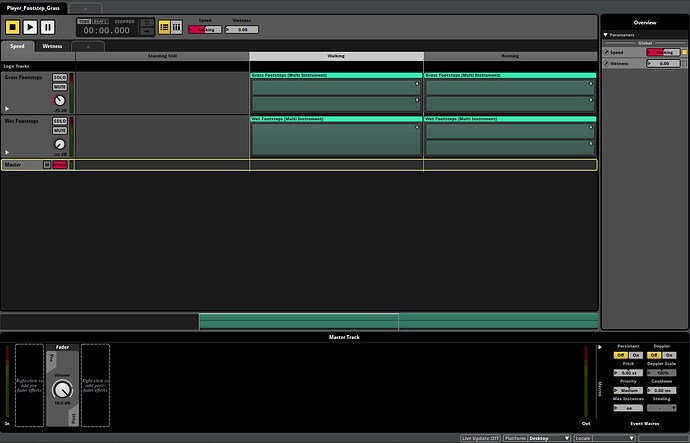 In FMOD, you’ll need to add a spatializer on at least one track (generally the master track) of your event, for it to react to 3D attributes the game code will send to the event. The presence of the spatializer is the only difference between “2D” and “3D” events.
Since the player’s own footsteps 3D attributes (x,y, z coordinates) will probably always match the listener associated to that player, it will sound 2D for that player, while sounding 3D for another listener.