We’ve recently migrated to FMOD on our project and everything is working fine audio-wise when we start the game in Play Mode. However, I get errors when building the project’s addressables since migrating: For the record, we weren’t loading the banks as addressables yet but even after following instructions from here, the problem persists.
As shown in the screenshot below, it seems the addressables try to put FMOD editor code in the bundle, code which relies on UnityEditor, a assembly missing when building addressables, causing the errors.

image1222×466 70.9 KB
Our addressables don’t contain anything exotic (sprites, scriptable objects, prefabs) so I figure this is more of a configuration issue since the project plays well before building

Thanks in advance for your help!

I seem to have found the issue:
The editor scripts get bundled because the project is missing the FMODUnityEditor assembly file, which would mark the editor scripts as Editor only, now comes the weird part:
I can see I’m supposed to get this file when downloading from the Asset Store, as shown by expanding Package Content from the plugin’s page 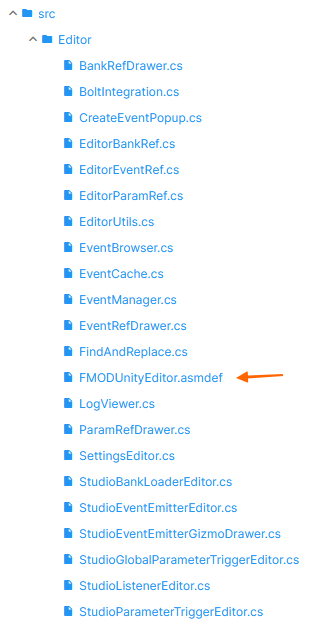 image322×627 20.5 KB
But when I try to import the package from the Package Manager, the file is missing, hence why I don’t have it in the project

Any other way to retrieve that file?

Thanks for your answer ! My problem wasn’t really version-related, I initially had FMOD in 2.00.10 and tried to upgrade it to 2.01.07 in hopes it would fix the bug but didn’t!
I ended up creating my own assembly file under FMOD/src/Editor 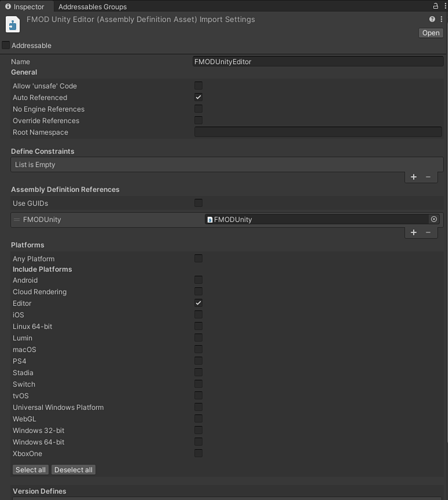