How can I wait until the end of a song to play a next song programmatically?

Hi! In my game I play different songs depending on what biome you are in (snow, forest, desert etc.) Currently, if the player walks into a different biome it will automatically transition into that biome’s music. However I would like to transition into the new biome’s music once the current song is finished, so it doesn’t switch songs so much.
This is what my music event looks like. The biome is a parameter and each one usually has a multi-instrument that shuffles through the songs.

I tried setting a callback on the music event but it just crashes the game and there’s seemingly no documentation on how these are supposed to work.

Unfortunately, using a parameter sheet to handle this probably isn’t the best way to go about it, because events can’t directly detect when an instrument has finished playing - therefore, there’s no direct way to wait for an instrument to finish before transitioning biomes.

There’s a number of ways to handle this problem, but a simple solution can be achieved without handling it programmatically. If the length of all songs for a given biome are the same, then you can set up a “logic point”:

If songs in a single biome have different lengths and you’re using a Multi Instrument, then this “logic point” method won’t work, as there will be a gap between when the shorter song ends and when the event hits the next transition marker. To work around this, for a given biome you can split songs of different lengths into seperate events, and handle picking which one to play in Unity.

How can I detect when a song is finished to then potentially switch the song to a different biome’s song OR if the biome is the same shuffle to another song for that biome.

To be able to detect when each song has finished playing you would want to have each song in a separate event, to avoid the issue I mentioned in my previous response where one song is longer than another in a Multi Instrument. You can then check when an event has stopped with Studio::EventInstance::getPlaybackState, and use the result of that to switch events.

Shuffling and picking a random song for a single biome is a little more complex - while you can basically mimic the “logic point” idea using C# to handle transitioning between events, you’ll have to handle sorting, shuffling, and picking from the events yourself. There are a couple of ways of doing this, but a good starting point would be to get an array containing all event descriptions in a bank with Studio::Bank::getEventList so that you can sort/manipulate the list in whatever way you need. Event GUIDs and paths are what will be easiest to compare against, and you can grab those with Studio::EventDescription::getID and Studio::EventDescription::getPath.

For example, after my BGM bank has been loaded, 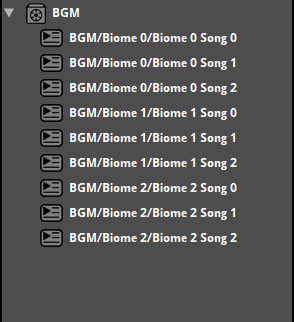 In Start() I might sort the events by path into a 2D List, with the first dimension representing the biome, and the second representing each event in the biome. From there, when transitioning to a new biome, playing a new song would look something like this: