How to pause buses but let UI sounds play

Hello, advice needed: When the player goes to ingame menu, our programmer uses the BusSetPaused function to stop all events, so that they continue after unpausing the game.

Problem: by pausing the Master bus (in our case SubMaster bus), UI sounds do not play as they are effectively paused. So player in the menu does not hear UI sounds.

If I would reroute the bus with UI sounds outside of the SubMaster, then it would mean, that volume of UI sounds would not be affected by Master and Sound effects slider in game menu and player would not have control over them. I just can’t think of a solution, any help?

Just use VCAs instead of bus for the player controlled faders! You’ll be able to put whatever you want inside.

As you’ve observed, pausing a bus pauses everything routed into that bus. You want to pause most of the events in your project, but not your UI events - and you want both the UI events and the other events to be controlled by the same volume control.

There are a number of ways in which you could achieve the behavior you want. Using a VCA, as Alcibiade suggests, is one such solution.

Oh man, I must have had a blackout, I completely forgot about VCAs.

Hello, yes, I already separated my events and it works. Basically I have a Submaster bus, which is paused and contains all sounds except UI, and then directly below the Master I have the UI bus. And player’s volume control is now done via VCAs. I don’t know why I didn’t think about VCAs, this solution is perfect for our project. Thanks for answer!

Hi! how did you make this submaster bus?

It’s a regular bus, I just named it “Submaster”.

This is my routing. 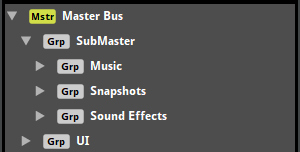 As for pausing all events apart from UI, we’re using this function as far as I know. https://fmod.com/resources/documentation-api?version=2.02&page=studio-api-bus.html#studio_bus_setpaused

Thank you so much it was helpfull for me!