ObjectProperty FFMODLocalizedBankTable::Banks is not initialized properly error (not using localization at all) [UE5]

I’m experiencing an error similar to this thread when attempting to package for Windows 64-bit:

This appears to be caused by having locales setup in the FMOD Studio project but not in the FMOD-Unreal settings. The integration sees multiple of the same bank (the different locales) but because there are no locales in the settings, it overrides the bank path in the lookup multiple times which then marks the lookup as dirty and requires updating.

However in that thread it’s a warning, whereas the printout in my Output Log is an error and it’s the only error I get so it must be the thing causing my package to fail. The rebuild commandlet provided in that thread prints out the same errors:

Also, I don’t have/have never had any localized tables in FMOD, but for the sake of this error I (tried to) make a bogus/placeholder one and I set it up in the Unreal settings too, to no avail.

So the fixes listed in that thread don’t help me. 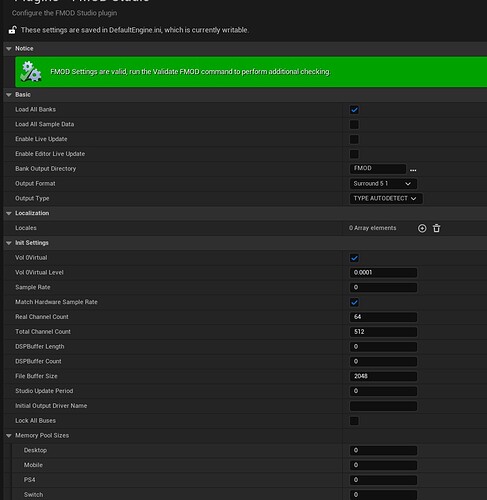 I tried changing the master bank name a few times, stopping at “MasterBank” as you can see here. I also tried another couple fixes for sort of irrelevant errors that involved changing the content browser prefix and additional non-asset directories to cook from “FMOD/Desktop” to something just like “FMOD” or something like that, I forget the exact “fix”, but it didn’t fix it.

I waited until 2.02.07 / the UE5 update came out today until I made this post, just in case updating would have fixed it (it didn’t). I deleted binaries and intermediate and rebuilt then retried packaging and still nothing.

No clue what to do…

OK I feel really dumb, but I got really fed up with this error and just edited the code myself. The two offending files’ USTRUCT constructors:

My game packages fine now. Should have done this ages ago; what a waste of time lol! Really annoying that I didn’t haha.

I haven’t verified if sound etc is working but at least those errors don’t totally block my packaging.

FFMODLocalizedBankTable::Banks is not initialized properly (nullptr already set)
jeff_fmod May 23, 2022, 7:11am #3

I see, thanks for the extra info. Looks like a few other people have been complaining about warnings like this with the latest UE version. This can be easily resolved by initializing the properties as you have done, so I’ve created a task to address this. Thanks for flagging!

Hi there - I think this is similar to my issue posted here:

Hi There I have done some searching on the fmod forum for a solution to my issue but im unable to resolve it. I get two warnings on packaging a project (ue5 5.02 - fmod 2.02.07) and it seems to break the build proccess and not complete the game compile. In fact it actually finishes with success but seems to ignore large portions of the project. I tested a compile without fmod just to be sure and it compiles ok. This fmod project is fairly basic - with some pitch functions and in editor it w…

I am unable to find those lines referenced above by HeavyAsStone

any tips you can give would be much appreciated.
Thanks!

Hi, sorry I truncated the line for brevity in my post. After the words UDataTable *Banks write =nullptr;

So it should say

Same with the bool section that I truncated if that’s throwing an error for you as well.

Let me know if you are still confused.

thanks buddy - that actually removed all the warnings -

Something still a bit odd in that the menu compiles ok… but other maps seemingly no longer compile when fmod is active.
I wonder if those warnings I mentioned in the post were not stopping the build…and something else is. It comes up compile success - yet seems to omit large parts of the compile proccess. I am a little baffled and should probably press on with other tasks.
Appreciate you coming back to the post to help! I will try dig the logs a bit for something useful that might give some sort of clue.

Thanks for the help

If you weren’t trying to use localized banks, then I think the warnings or errors that were appearing from Banks is a non-issue and the change you made probably has no bearing on others parts of your project not compiling. At least from what I’ve researched. Apparently a similar warning can appear if you haven’t set up localized banks properly in both FMOD and in UE’s fmod settings but it’s enabled in one or the other, but if you’re like me and hadn’t touched localization at all yet then it’s just a harmless error.

That being said, if it was an error like me and not a warning it was indeed blocking your compile/build. If it’s still messing up, then for sure you have some other issues

Glad you got this one sorted out though!!