Play same variation of multi instrument on all clients

We’re making a multiplayer game, with a voiceline system. 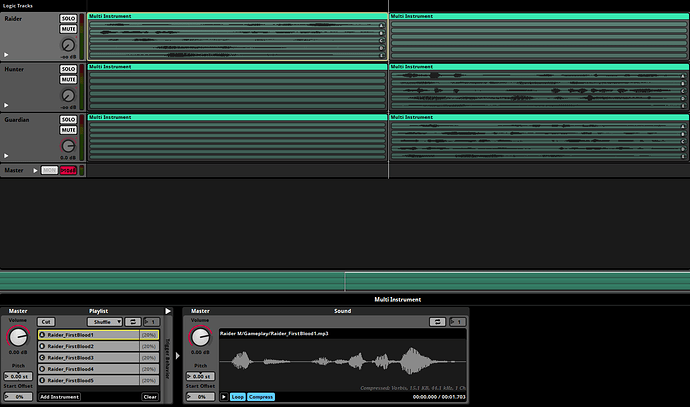 image1393×822 63 KB
We used Multi Instruments for the different voiceline packs, that plays in Shuffle : However, as it’s randomized, when someone plays a voiceline, the other player will hear another random voiceline.

Of course, we could put the voicelines in Sequential : Global Scope, but that wouldn’t reach our objective.

Thus, we wondered if it was possible to indicate, or at least retrieve a voiceline index in the multi instrument ?

What would be the cleanest, easiest-to-tweak way to ensure the same voiceline is played ? It would be very very long to create a custom parameter that triggers a certain part of the tracks, each having one voiceline… Would take ages to do, as there’s not the same amount & length of voicelines !

As of the time of writing (June of 2021), the only way to synchronize the random behavior of different instances of the FMOD Engine is to use the same random seed for each instance, and to ensure that each instance of the FMOD Engine plays the exact same events in the exact same order. This method method is generally not suitable for synchronizing audio across multiple clients playing multiplayer games, as there is no way to change the random seed used by FMOD Studio after initialising the Studio system.