So we are using the latest FMOD + Unity + SVN. After importing the package, I have a whole bunch of library files under /Platforms: iOS, Linux. etc. We may bring in some of this (a Linux build could be fine), but a bunch (like iOS) aren’t really relevant. Only a few of our machines have multiple build configurations (our building is mostly done via a dedicated build machine).

We do not want to remove unused libraries: its possible we will want to one day build Linux, from either a Linux build machine / machine with the Linux platform setup.

But then we have a big problem… whenever one of our team opens the project in Unity, it automatically deletes the platforms they don’t have. For example, our writer only needs to have Windows and is not expected to make builds, so it automatically deletes iOS, Linux, Mac, etc. Which then show as Missing in SVN. Which is distressing, and also highly error prone as the interface is basically telling them to submit these files… which would mean deleting the Mac libraries which would break the game for our Mac user when they update.

Likewise, our Mac user if they update would have it delete the Windows library. They don’t need to have the Windows build configuration installed. Because it automatically deletes these files, it results in them having ‘missing’ in SVN, version control distress, and again the possibility of them submitting a breaking change for the rest of the team.

I can’t ignore files in SVN that are in version control. It also seems that I need these files in version control, say if I wanted to have our build machine generate a Linux version. I can’t just delete unused libraries temporarily because we have this conflict over Mac and Windows within our core team.

A workflow to ignore dozens of files per commit is… tedious and risky. Changing version control is not an option. Is there any way to perhaps have FMOD not delete these files on asset import? Can we just comment out that behavior? How badly would it break? I really don’t care if the Mac user has unused Windows libraries or our writer has unused Mac libraries and both have unused iOS Libraries.

The FMOD for Unity plugin should not be ‘deleting unused platforms’, the only time it does delete any libs is during the initial setup or any time you update the plugin.

The new libs are initially added to a staging directory, so they don’t conflict with the current libs. 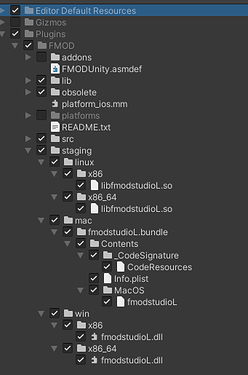 Any libs outside of the staging directory should only be deleted if they are being replaced.