I have a car tire system set up with 3 different terrains. The “terrain” parameter fades in and out nicely between 1 (asphalt) to 2 (dirt), as well as from 2 to 3 (grass), but when I need to go from 1 to 3, I can’t get the fade, because the terrain parameter has to go through dirt, to get from 1 (asphalt) to 3 (grass). 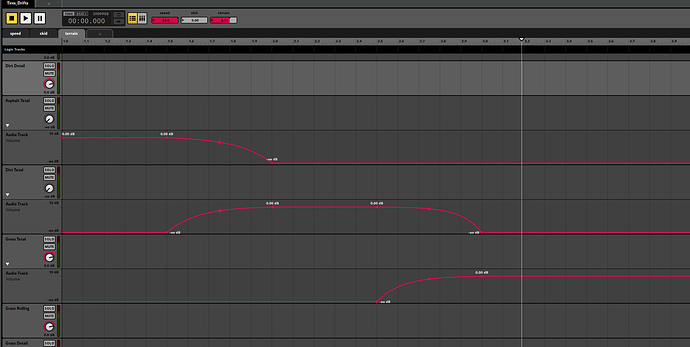 Indeed, that’s not the best method. Maybe one day my suggested feature will be implemented and it will be possible to do that directly. But in the meantime, in your case, I think I would go with a discrete (labelled) “terrain” parameter, instead of continuous, and set an attack and release (AHDSR) on each instrument. The transition would then have a fixed timing, which would probably even be better than your transitions driven by the parameter’s value: after all the car can’t be at the same time on asphalt and dirt… The only drawback is the first time the event will play: the attack would also apply. But this could be acceptable if this attack value is sufficiently low.

Brilliant. that does the trick! Thank you.
Follow up question, will it impact omptimization to select all the instruments like this and add AHDSR to all of them, as I’ve done here? 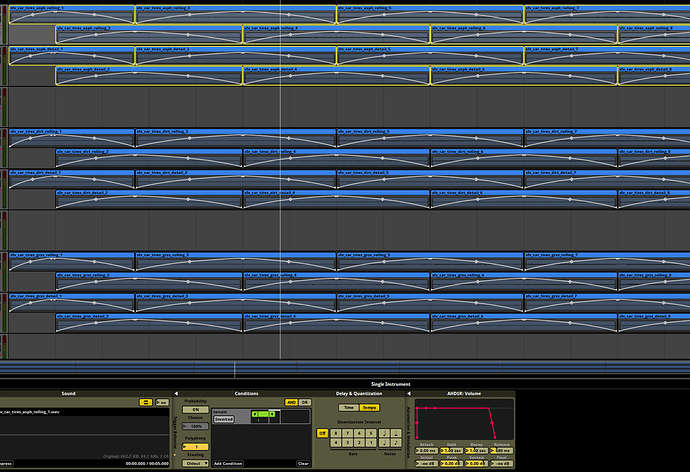 Would it be better to make a reference of each one in their own events, then bring them all into the one event so I would only have to apply one to each?