I’m trying to setup FMOD using a build path but keeps showing the message Build path 'Assets/.../Desktop' does not contain any built banks., but in the folder it contains the build banks.
All paths are correct and I have no idea what is going on. Added screenshots for clarity. 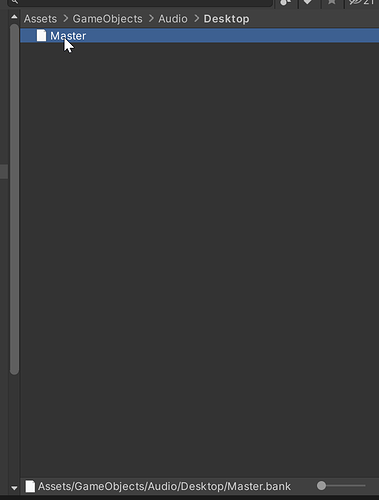 I discovered the error, building with FMOD studio wasn’t generating “*.strings.banks” file so Unity wouldn’t recognize banks, and if I tried to force add banks it would later erase them. There should be a routine separated to detect if both files are included or not, also Studio didn’t proc any errors on build and I don’t know what made it behave this way.

Does your FMOD Studio project include at least one bank that’s marked as a master bank in FMOD Studio’s banks browser? Look for a bank with a small grey box containing the word “Master” next to its name.

FMOD Studio creates the .strings.bank file when you build this “master” bank.

The master bank also serves a number of other important purposes, so an FMOD Studio project will not function properly in-game without one.