Hi!
I just wanted to share the .gitignore that I’ve been using when implementing FMOD in Unity.

Add these lines to your git-/hg-/collab-ignore file:

Here’s an explanation as to why I’m explicitly telling Git to NOT ignore any .dll-files in the Assets/Plugins/FMOD/-folders:

Sometimes when I was implementing FMOD into Unity, the integration would work fine for me, but my teammates would have Unity Editor spew out +9999 DllNotFoundException: fmodstudioL-errors when they pulled the implementation of the FMOD Integration from source control (Git). Nobody knew why the issue was happening and it was starting to make me hesitant at implementing FMOD in a Unity project, since it started to become equivalent to spending a day or two of just getting the integration to work …

Here’s a full gitignore which you can put at the root of your Unity-project (ie. one folder up from /Assets/) when creating a new Unity project which will use FMOD:
.gitignore with fmod.txt (1.1 KB)

Just rename the file to .gitignore. (with the dot at the end!) and it will “become” a proper gitignore-file.

Or you can copy-paste the text from here: 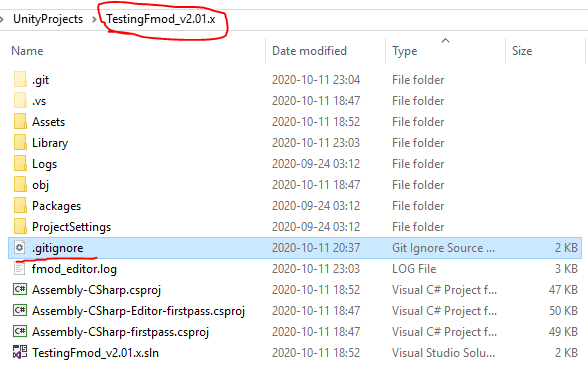 Thanks for sharing, we’ll add some of this to our documentation to help others.

Awesome! Looking forward to seeing it in the official docs

Awesome! There’s the ultimate .gitignore that I use now, over at https://github.com/github/gitignore/blob/master/Unity.gitignore
this will be a great addition to it

I’m new to FMOD unity integration and git. Glad I found this info.

Sorry if it’s obvious, but does it mean the following steps will ensure every member has a working, FMOD integrated project?

Or do they have to manually import the integration package at some point?

@chocobo that’s correct, if you follow those steps then your teammates will get the FMOD Unity Integration when you push it to them (Step 5 on your list)

So upon further investigation, I believe the best way is a hybrid between pushing everything on git and doing manual integration by each member.

The problem with the push-pull-only approach is that each team has its own .gitignore setup, which would likely cause some part of the FMOD integration to not be tracked besides the .dll, which we tried did break the integration. Even using the community-maintained .gitignore here while including the .dll caused the breakage.

Another problem is with /Assets/Plugins/FMOD/lib, where the bulk of the integration resides (close to 400MB) but won’t change during the course of development, only slowing down git.

What I did was to add a line to ignore /Assets/Plugins/FMOD/lib, and then let teammates install the integration themselves, and it worked on everyone’s systems.

A caveat of this approach though, is if you ever want to delete the integration, you’ll have to go through extra steps on each person’s system, or completely remove the repo and clone again from earlier state without the integration.

In FMOD, the goal is to establish sound bank build path & separate it and the FMOD project to make it easier for git

What you pushed will not be working on other machines due to .gitignore and that’s where manual integration comes into play

Usually we’d expect people to commit their .gitignore to git so everyone is setup correctly. There is a section in our user guide that gives an example addition to add to your shared gitignore correctly permitting the FMOD libs (and other files) even if they are excluded more globally. This addition is compatible with the Unity master .gitignore.

This is the recommended workflow so that the rest of the team doesn’t need to deal with FMOD integration. It also means when FMOD is updated, the change is rolled out to all instead of asking everyone to make changes (potentially leaving some people on the wrong version).

Do you have to put the path before the exclamation mark too?

Never ignore DLLs in the FMOD subfolder, so make sure that the FMOD-folder is in the correct path.

No, the paths are relative to the .gitignore file, so for you, place the file in C:/XssR/IAM6

Hey, I am just starting to use FMOD and I am running into a small issue.

So I have Unity opened with FMOD for Unity package imported.

I have set up the gitignore according to your advice.

Then when I switch a branch, one of the dll files is not removed and is being transferred to the branch that I have switched to. Specifically, its the Assets/Plugins/FMOD/platforms/win/lib/x86_64/fmodstudioL.dll

Obviously, if I first close Unity and then switch the branch this does not happen.

Of course, I could do this every time I need to switch a branch, but it is kind of annoying. Does anyone know of any fix for this?

Just linking in the response from your other post here:

FMODStudiol.dll file stays in the project when switching branches Unity

That DLL will be the DLL that Unity is using to run FMOD in the background. It cannot release it whilst the Unity project is open, which is by design, so you will need to close Unity before changing branches.