I’m using a Scatterer Instrument with Spawn Rate automated and controlled from API in order to simulate a creaking sound tied directly to movement in the game.

The spawn rate can get very fast at times. The FMOD Studio editor often has issues keeping up, but in the actual build it worked fine in FMOD 1.10. However, after upgrading to FMOD 2.01 I’m seeing issues in the build.

What seems to happen when FMOD can’t keep up is that several of the spawned sound play clumped together at once instead of spread out. So it sounds like fewer louder clicks instead of a higher amount of quieter clicks. And after the 2.01 upgrade, when starting the event with the Scatterer Instrument it often starts with one loud click, which I assume it many spawns played at once.

This really ruins the sound effect. Is there anything I can do to make FMOD be able to handle this at as high a Spawn Rate as it could in 1.10 without these stutters?

The issue seems to happens across platforms (Windows, Mac, Android).

I’m not seeing the same behaviour on my setup, are you able to post a screenshot of the settings you have on your scatterer instrument and of the event as a whole? It might be some settings got changed during the migration.

The settings look the same to me. 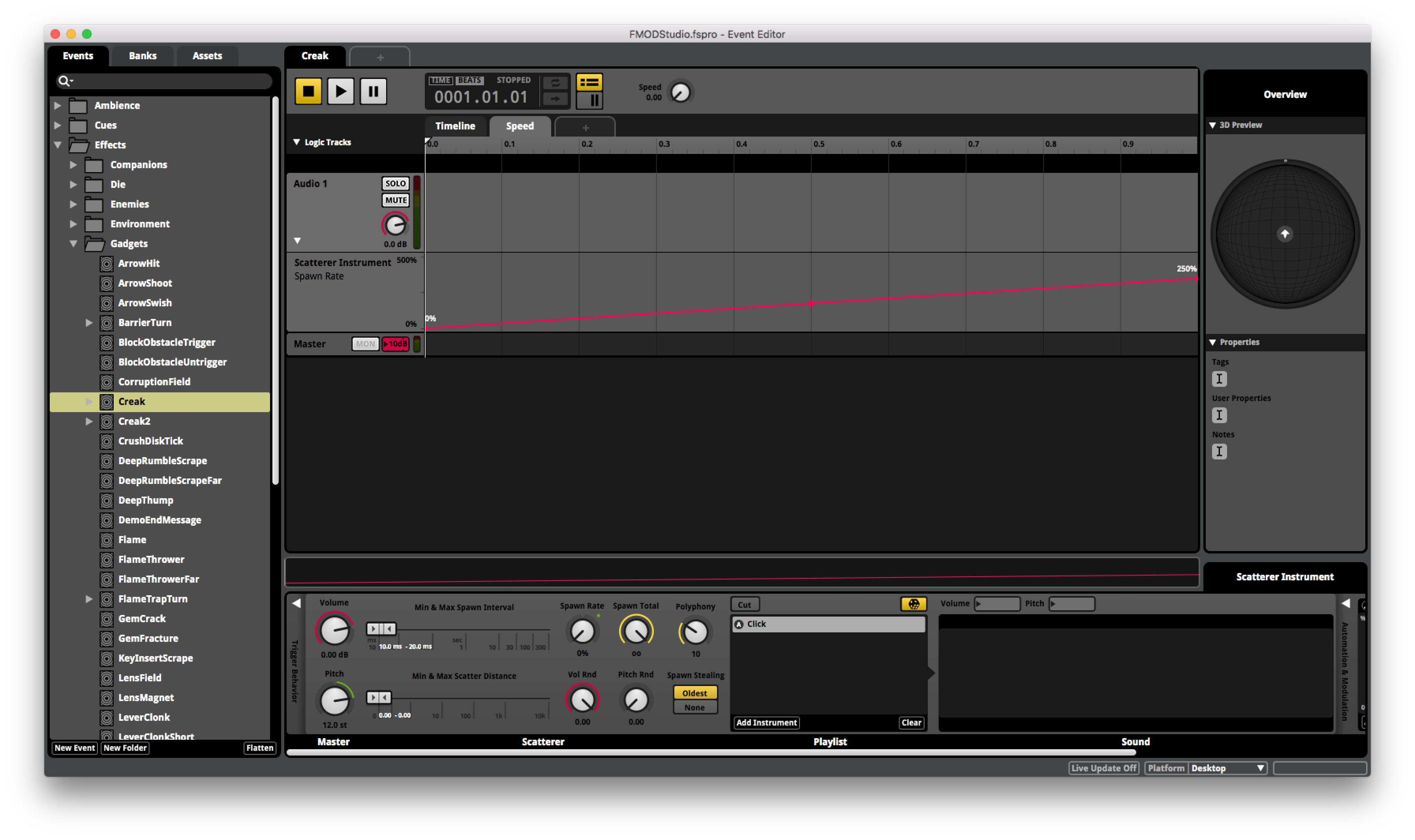 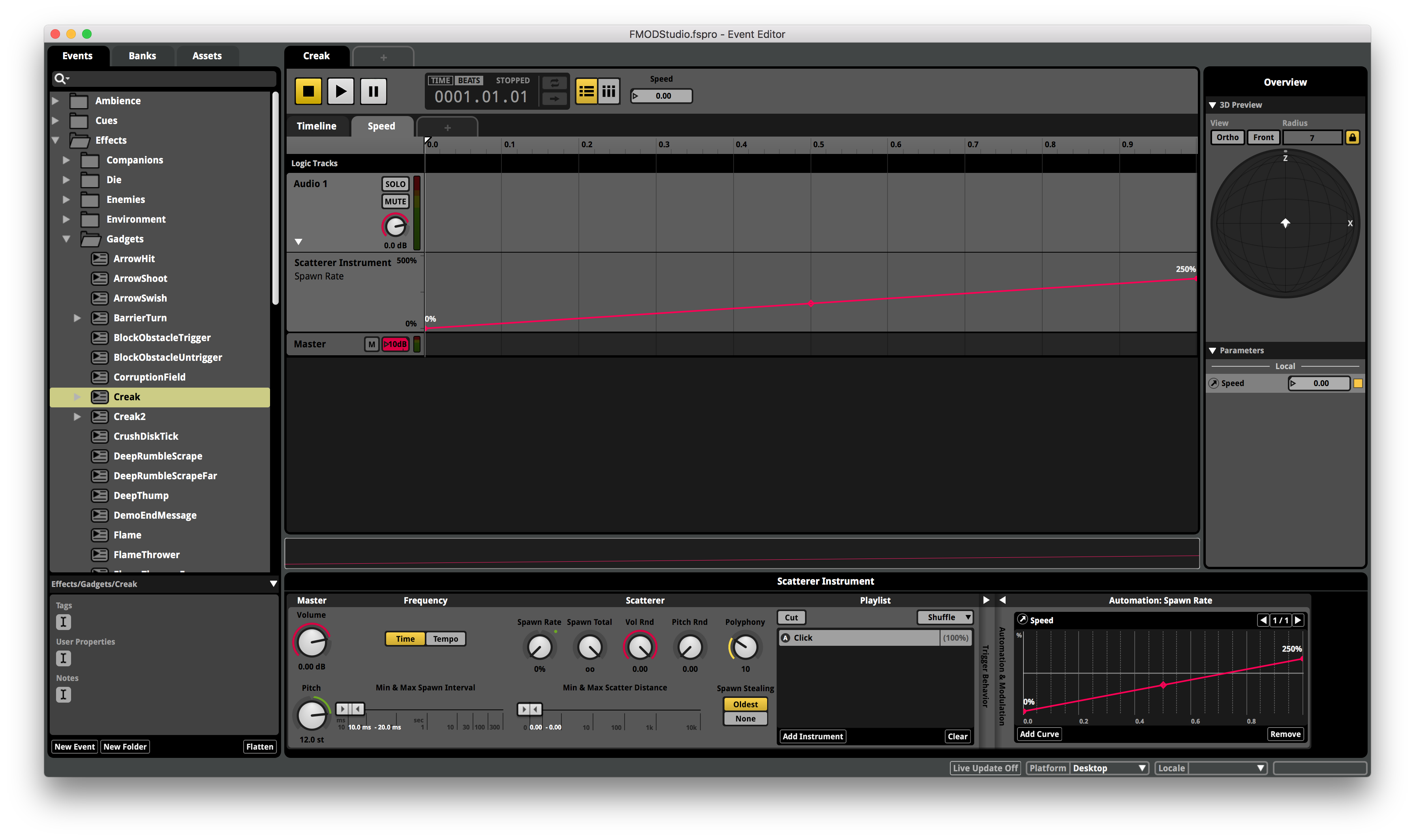 They also sound quite the same in the FMOD Studio editor in both versions - FMOD is struggling keeping up in both cases.

I’ve been able to replicate the issue on my machine. As you’ve pointed out this happens in the FMOD Studio application in both 1.10 and 2.01 but in runtime in only with 2.01. I’ve raised a bug report and will investigate why this is happening. In the meantime it looks like this happens once the spawn rate goes above 300% so either you will need to remain on 1.10 or only allow the spawn rate automation to max out at 300%.

I’m glad you were able to replicate it.

The automation already maxes out at 250% in my setup, as the pictures show as well, and the issue happens well before even hitting that. But there could be differences caused by what sound is used, or other settings, and even what machine it’s run on.

I’ve now managed to show the issue much more clearly. See this video: 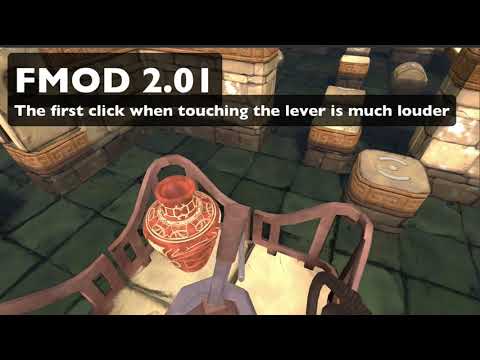 It’s clear that this doesn’t only happen at high frequencies. The initial loud click in 2.01 happens when the frequency is very low.

For some reason, how much louder the initial click is, seems to depend on how big a pause I take before touching the lever again. As if the clicks accumulate when the speed is zero, and then are played all at once when it goes above zero.

As is clear from the video, this initial loud click really ruins the sound, and it can’t be related to performance issues due to high frequency, since the frequency is rather low when it happens.

I’ve now managed to show the issue much more clearly.

Thank you for providing this video. We’ve replicated the issue and should hopefully have a fix in a future release. We have a release due very soon and this fix will hopefully be in the release after this one.

I’m glad you were able to reproduce this and think a fix might come soon!

Since FMOD 2.01 is still a supported version, does that mean you still release patch releases for it? So that the Scatterer Instrument fix would come to a 2.01.x release and not only 2.02.x?

How to avoid manually upgrading hundreds of [EventRef] to EventReference? Unity

I’m trying to upgrade a Unity project from Unity 5.6.6 to Unity 2019.4.32 and I’ve got everything more or less working now except FMOD. FMOD did actually work in the Editor without doing anything, but not in builds. It seems like I have to upgrade to FMOD 2 for it to work in builds with Unity 2019? Now, as part of the upgrade process I ran the tool to update event references, and then I was presented with a huge lists of thousands of entries that all said “Manual Task: Add an EventReference fi…

The problem actually started in 2.01 so the fix will be in 2.01 and later. You shouldn’t need to update to a major version for this issue.

the fix will be in 2.01 and later. You shouldn’t need to update to a major version for this issue.