Hi
I am working on a Unity Project to try and build to WEBGL using Oculus SpatializerFMOD plug in.
I cannot get any audio when the build is finished.
I tried to upgrade to newer unity version but still having the same problem.
Unity Version 2020.2.6f1
FMOD studio version 2.01.08
Error attached when building in development build 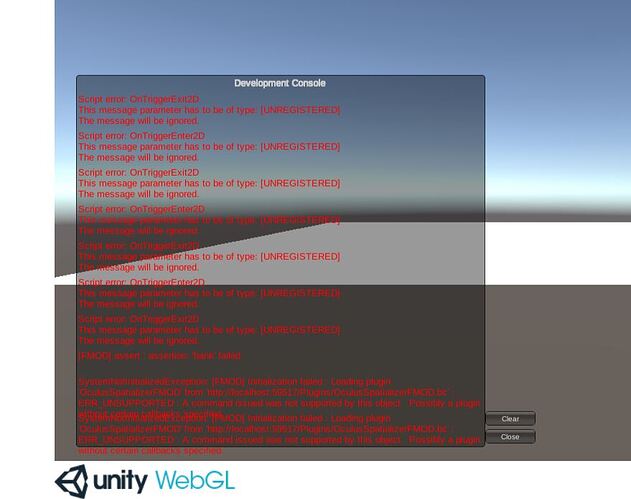 I have spent two days trying to fix…
Can anyone help?

Can you confirm you have access to a WebGL version of the Oculus spatializer?
I was under the impression that did not exist?

Hi Mathew,
Thanks you for getting back.
I am not sure, perhaps FMOD in WEGL using Oculus Spatializer is just not possible?
I cannot find any definitive documentation apart from the link below.
Would you know if this is possible or not?
I was hoping I could demo an idea through Itch.Io from a unity project using fmod oculus spatializer but I am now stuck and unsure how I can demo this.
Would you have any ideas?

Thanks for your help.
Colin

I double checked the Oculus website and I did not see any FMOD plugin for HTML5 so I’m afraid it might not be possible. If you replace your usage of the Oculus spatializer with the FMOD spatializer you should be able to get audio playback, however it will not be binaural audio.

Thanks for getting back Mathew, at least I know now that its not possible.
Thanks again for your time.
Colin