Any ideas why? and a possible fix?

The white sphere only updates using the values in the Emitter Override Attenuation values:

If you would like to use the sphere enable Override Attenuation on the emitter and then you’ll see the sphere update.

Thanks for the swift response. However, that has not worked…

As you can see from the image, “New Event” has been update to 9.00 - 100m distance, yet after building in FMOD it does not update. It stays as it was before. Previously, (other versions) one would build and the sphere would update. That doesn’t seem to happen at all here. One didn’t need to select Override Attenuation either…it just updated i.e got bigger or smaller based on what was set in FMOD on the Spatializer. 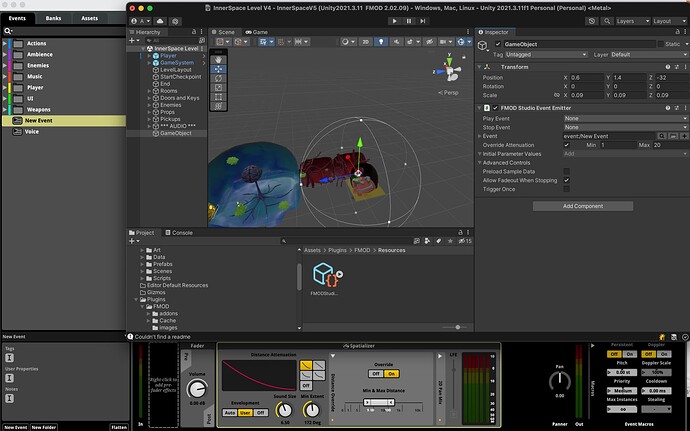 Thank you for bringing this to our attention

Ah ok thanks. Is there an update coming soon?

In the meantime, do you know if I can roll back to a version where you know it does work? I only ask, as I teach FMOD/Game audio and the concept of seeing the emitter’s spacializer setting uodate/change is quite significant/very helpful to all.

Sorry I can’t provide a timeline on updates.

We have looked into it further and can I check you are using the same version of Studio and the integration? Is the Refresh Banks prompt displaying after you build banks in studio.

I completely understand, the visual representation of the attenuation would be really useful when teaching. Thank you for choosing FMOD!