Hey all,
As I believe I installed the oculus plugin correctly for fmod and unity, why is it that when I apply the oculus spatalizer to an object in game, I can no longer see the attenuation spheres?

I’ve tried to override attenuation as shown in the video below at about 14 minutes in to control the attenuation inside unity instead of the fmod UI, but my option for that is greyed out entirely and I just simply can’t turn that option on, though I can if I otherwise use the fmod spatalizer. Switching it back to the oculus one will again just disable the view of the sphere. 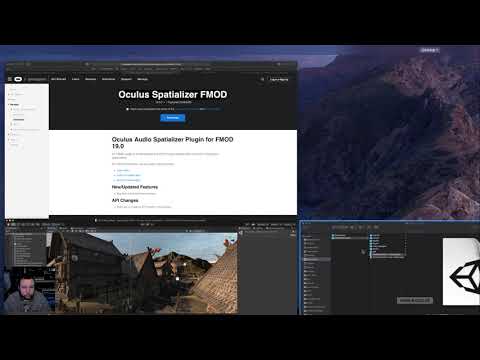 This option is disabled if the event you are emitting is 2D. Could you click the triangle next to “Event Properties” underneath the event path in the component and you should see if the panning is 2D.

In the FMOD Studio project you need to add a spatializer in order for it to be considered 3D, then build the new banks and it should allow you to override the attenuation in Unity.

Thats where my confusing lies, the oculus spatalizer is in the event, the session is built, but the plugin is seemingly not recognised or something since in unity it says its in 2d. I have the necessary package imported and I have the plugin named inside my fmod session path settings too, but still no dice.

I essentially followed everything in the video, but I guess i’m messing something up along the way. I’ve reinstalled everything related to the oculus spatalizer but im constantly getting the same outcome.