There seems to be a bug when several snapshots are involved at the same time with HTML API. Check http://chiptunegenerator.com/ click on start after loading, then press the button “build-up” and wait for it. In the middle of the build-up, you will hear the sound disappear (then comes back later with some scratches). The way it sounds makes you think of an engine low-level bug.

The bug occurs with a local web server, online, on both PC and mobile phone, but it doesn’t occur in FMOD Studio. The snapshots are triggered in a nested event. Nothing fancy in those (overriding) snapshots, only some faders down (different faders in each snapshot). It corresponds to the moment where 3 snapshots are playing simultaneously and one is released (bar 5 in the following picture). 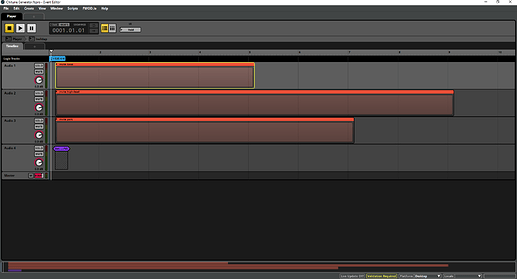 EDIT: I’ve tried with differents API flavors, it crashes the same. However, I tried on an iOS device, and it crashes differently (than Chrome or Edge on Windows or Android): the crash occurs when the last snapshot releases (it does a big boom - which isn’t bad, but wasn’t intended!)

Hi,
I think the only way to debug that would be to get the source studio project so we could try building it and running it here, if you are ok with that. I would like to test on native win32 vs html5 for example.
Brett

Hi, I just sent the source project to you.

I’ve eventually found out what was going on!
The problem was that all 3 overriding snapshots put a reverb send on the master. When a snapshot releases, the reverb release conflicts with the remaining reverb of the other snapshots still playing. I didn’t want this reverb so I will correct my project. But it also sounds like something FMOD should be able to handle without crashing.

it could be a limit issue, like the memory pool size for example. I have yet to try out the project but will get onto it soon. Glad you found a workaround.