Reverb Not Working With Google Resonance

Heyo - Having trouble figuring out how to utilize Google Resonance spatializer with my reverb sends/snapshots. Everything works fine when the Resonance source is not enabled, but when it’s enabled I get dry audio that does not utilize the reverb sends/snapshots that it’s group is assigned. I’m sure it’s a small thing I’m missing, but any guidance would be appreciated. Thank you!

Still can’t figure out the solution to this. Reverb snapshots work fine with built-in spatializer. Google Resonance works fine in Unity with FMOD, but doesn’t utilize my reverb snapshots. Any ideas?

Google Resonance, along with other specialist spacialization effects, do not route the conventional way. They send audio straight from the Resonance Source effect to the Resonance Listener effect. For more information take a look at our docs

Ah, I see, thank you. If it routes directly to the Master Bus than is it not possible to use Snapshot reverb effects with Google Resonance? I’m having trouble understanding how this setup would look. Thanks, Richard!

@richard_simms Finally coming back to try to get this working. As far as I can tell, I’ve followed all instructions to the T and still can’t get it to work.

I have several audio events which are in the ‘Music’ group. Each event has a Resonance Audio Source in its Master Track. I have convolution reverb effects set up as Returns under a ‘Reverb Zones’ group. I’ve placed a ‘Resonance Listener’ before the fader and before the sends to each reverb Return on the Master Track of my ‘Music’ group. 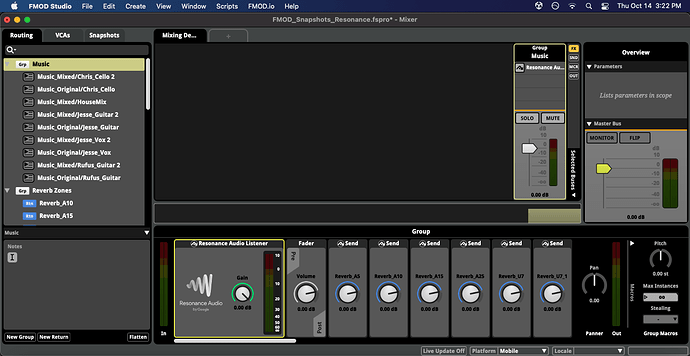 I then build all banks. When I try to test in editor, it gives me the following error:

If I place the ‘Resonance Listener’ on the Master Bus, the above error no longer shows up in editor, but when I build to iOS the app locks up and I get the above error in the log. I made the recommended changes in the ($UnityProject)/Assets/Plugins/FMOD/fmodplugins.cpp) file as well.

Any ideas on where the issue lies? I’d be very grateful if someone could assist us in getting this working, as we need the early reflections of the Resonance plug-in. Thank you!

Quick update. These errors only pop up once I’ve added the ‘FmodResonanceAudioRoom’ script to the project. If I play before adding this script, it seems to work fine as confirmed by running Live Update in FMOD Studio and verifying that the Resonance Source is routing to the Resonance Listener and I’m hearing audio playback in Unity.

It seems this issue is the same as in this thread:

Hello all. This is more of a report than an actual question, since I seem to have found a way to prevent/fix it, and I though I should share the whole deal with users and personnel alike. Not sure if the source of the problem lies with FMOD, Unity, or Resonance though. I was trying to run some tests with the Resonance Audio Rooms, when I came across this in the console: [1st message] Resonance Audio Listener not found in the FMOD project. UnityEngine.Debug:LogError(Object) FmodResonanceAud…

Was this ever solved? Thank you!

This issue is still outstanding. I’ll see what can be done about prioritising this issue for the next update, but I cannot guarantee anything.

Thanks for the reply. So as of now Resonance is not possible to use with FMOD at all? Are there any workarounds to get this working before an official patch?

Currently no workarounds are available due to its complexity but it has been scheduled to be fixed in our next release.

Fantastic! Thanks @richard_simms. Do you have a rough idea of when the next release will be available?

We try to release minor versions every few weeks, but with the pandemic these can be a bit sporadic. We are hoping for a minor release within the next two weeks.